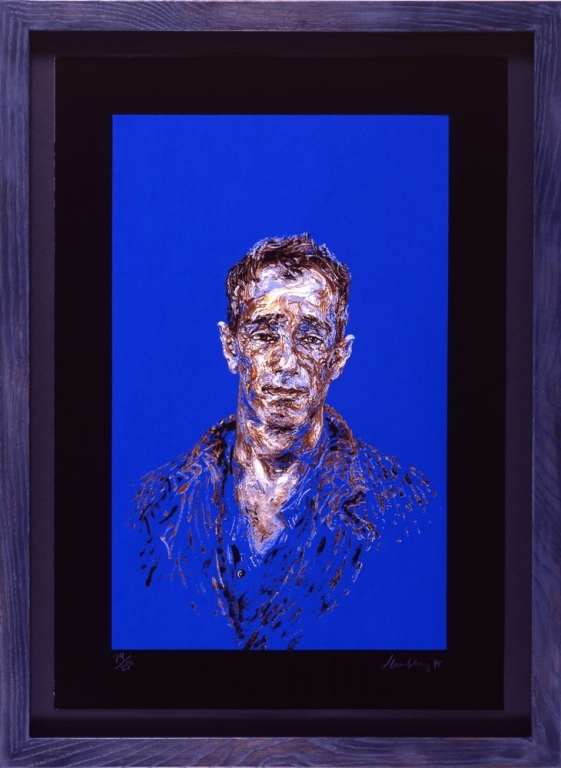 There are under 20 left from this edition of silk-screen prints. One print from this edition we recently loaned (with Maggi's permission) to the exhibition 'Derek Jarman: Modern Nature' at the prestigious John Hansard Gallery, curated by Philip Hoare.

Maggi Hambling first met Derek Jarman when both were at art school in the 1960s, and they became close friends. Film maker Derek Jarman achieved great acclaim for films such as Carravagio and Blue; but he was also a champion of gay rights, as well as being an accomplished painter, writer and garden designer. Although Derek Jarman had been suffering from AIDS for some time, his actual death in 1994 came as a shock. Remarkably, Maggi Hambling painted his portrait from memory three weeks after his death. The painting sold immediately into a private collection, although it was recently loaned to the Ashmolean Museum, Oxford.

This edition was initially derived from the painting, but Maggi Hambling also hand-touched the screens to both make this an original image different to the painting, and also to ensure the graphic and 3-D quality of her brushwork and balance of colours were maintained. This edition not only enables more people to see and own one of her greatest portraits; but also raises much-needed funds for Terrence Higgins Trust, helping people with HIV and AIDS. £100 from each is donated to THT.

Maggi Hambling (born Suffolk, 1945) was First Artist in Residence at the National Gallery, London, and has works in many major public collections including TATE, National Gallery, National Portrait Gallery, British Museum and many others. More details on our website.

IAP Fine Art has a long association with Maggi Hambling since 1998, having published 3 editions of silkscreen prints with her to raise monies for Terrence Higgins Trust.

Woman and Cats - Poster
Will Barnet