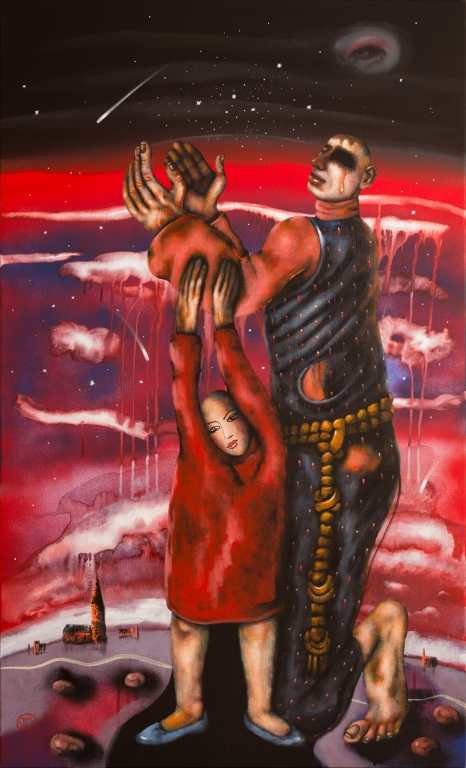 SOLD. This new major work from Chris Gollon's studio is entitled 'Alexis, The Poor Pilgrim'. The son of a 5th-century Roman nobleman, Alexis abandoned his wife on his wedding day and passed the rest of his life as a penitent in the city of Edessa, northern Mesopotamia, where he lived by begging and ministered to and shared alms with the poor and the sick. He is often known as the ragged or the poor pilgrim. In Chris Gollon's painting the former nobleman's colourful finery is threadbare and frayed as he follows his faith and vocation, and we seem to encounter him just for a fleeting moment on the road.
Born in London in 1953, Chris Gollon is a very established and highly-acclaimed name in European painting, with many solo museum shows and museum acquisitions, including the British Museum. Chris Gollon currently has a major national touring exhibition to British cathedrals (more info on chrisgollon.com, the artist's official information website). IAP Fine Art is a friendly gallery (with galleries in both London & Hereford). We help private and corporate collectors begin or expand their collections, and we also work with museums and cathedrals with regard to exhibitions and acquisitions.