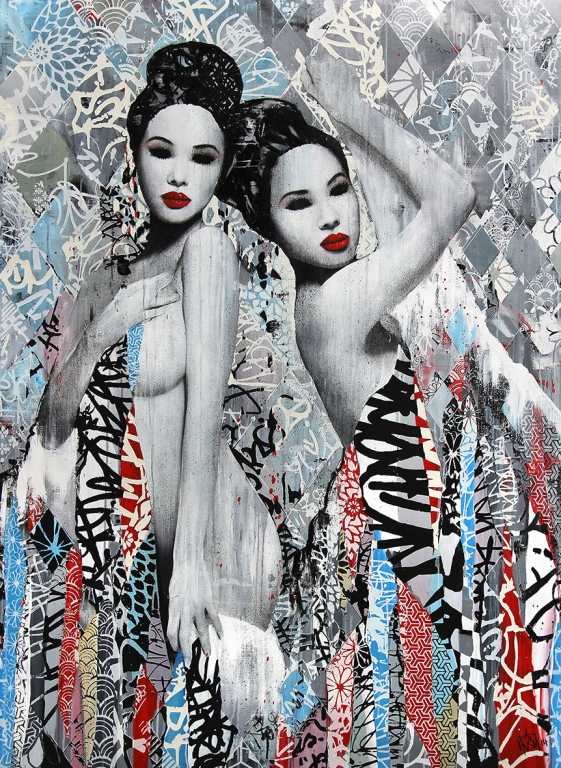 Formally trained for five years at the Newcastle school of art and design, HUSH took to painting after years spent working as an art director in the Far East. His work translates directly from street to gallery; recent sold-out shows include Fatales at Lazarides, London, Unseen at Corey Helford, Los Angeles and Sirens at Metro, Melbourne. His collaborations include a range with Burton snowboards and he was featured in The Independent newspaper’s 2008 list of “Twenty Up and Coming Artists.” Born in 1976, he resides and works from his home town of Newcastle upon Tyne, northern England.

Hush’s unique style, recognisable through its focus on the female form set within backgrounds filled with an expressionist’s freedom of layering and colour. The serene balance of traditional painting is combined with a messier passion, influenced by Western traditions of action painting and graffiti, culminating in a harmony that feels surprisingly natural.

The artist’s mark-making bears the distinct aesthetic of tagging, bringing the rough texture of street art into each piece. Swift gestural marks underlie splashes of paint, looping through lines and over bright combinations of colour. With an in-depth technique that includes painting, screen printing and spray-painting, Hush creates work that instantly draws the eye in and holds the viewer’s focus. Patterns ranging from geometric repetition to florals that conjure up images of royal tapestries and delicately decorated vases are not solely confined to the background but often take shape, forming graceful fabrics. In some works these shapes appear solidly, while in others the central figures are only lightly delineated from the waves of pattern, body and background blending, as if they are sinking into the colourful composition itself.

HUSH has been featured in several publications including Street Knowledge (Harper Collins) and The Street Art Stencil Book (Laurence King Publishing), Huck magazine, Complex Magazine, Art Monthly and London’s newspaper, The Independent (where he was recognised in their list of the “Top 20 Up and Coming Artists”). In 2010 Hush will release a series of snowboards with Burton and a series of commissions with Mitsibushi Securities Bank in London as well as exhibit with the Portsmouth Museum of Art (NH). He has exhibited internationally with White Walls, (San Francisco) Opus Art (London) and New Image Art Gallery (Los Angeles) and nationally with SCOPE Art Fair (New York, Miami and Switzerland), Upperplayground (San Francisco) and Carmichael Gallery of Contemporary Art (Los Angeles). In 2011, Hush launched the installation program and exhibition space, onethirty3, in Newcastle, UK. In 2013 he will be showing at May 2013 – Solo Show – Corey Helford Gallery, LA, USA & Nov 2013 – Installation / Solo Show – The Outsiders, London, UK

Other listings from Metro Gallery

Life Is A Circus
Samantha Redfern