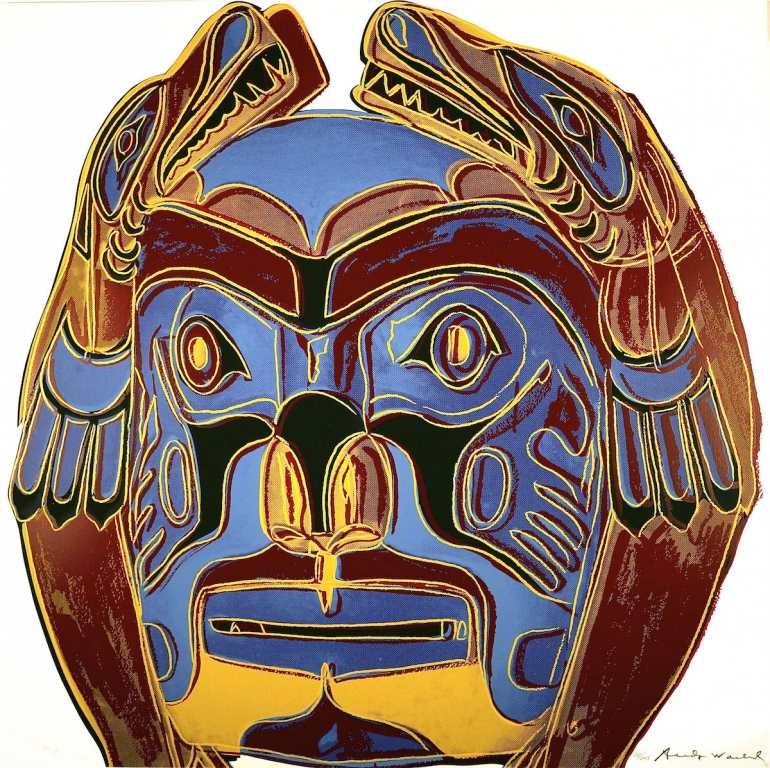 Andy Warhol created Northwest Coast Mask in 1986 for his Cowboys and Indians portfolio. This portfolio presents a popular and ahistorical version of the American West. Abandoning all pretexts to realism or historical accuracy, Warhol instead chose to focus on common objects and cinematic representations that contributed to the popular iconography of the frontier narrative. He appropriated Native American imagery, such as this image the Northwest Coast Mask, and removed them from their original context and presenting them alongside American “heroes” of the mythologized Wild West. Warhol used vibrant shades of blue, red, and brown – colors often associated with Native American culture. The intricate details of the Northwest Coast Mask are accented with bold colorful outlines that create a three-dimensional effect in the print. By presenting these tokens of Native American culture together with American figures like John Wayne, Teddy Roosevelt, and Annie Oakley, Warhol confronts the viewer with the Hollywood adaptation of the American West, a commentary on how media and popular culture interpret history. Andy Warhol was fascinated with pop culture and the contrast between media and reality, and Northwest Coast Mask demonstrates how the pop artist expressed this in work.