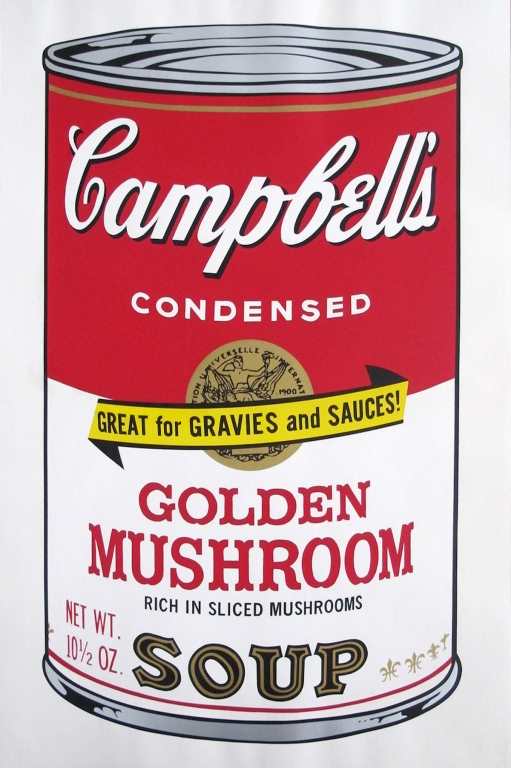 This print, the Golden Mushroom soup can is part of the “Campbell’s Soup II” portfolio which comprised of 10 prints. The ten prints come from Warhol’s 32 Campbell’s Soup paintings that were produced 7 years earlier, where he created all of the varieties of soups that Campbell’s made at the time. In this print, Golden Mushroom is written in a different font then found on others in the portfolio, and also has a yellow banner through the seal reminding consumers that it also makes for great gravies and sauces. These unique elements make for an interesting print, and are what separates it from the first Campbell’s Soup print portfolio, which featured more traditional flavors, and the cans without any unique design elements. All of the 10 prints in this portfolio have some element that makes the can look different than the standard black, white and red can.

The Campbell’s Soup can is one of the most, if not the most, iconic images of Warhol’s career, it was also his favorite. The idea of using an everyday object actually came from a friend who suggested if because it was something that Warhol ate everyday. Also, Warhol had been working with comics and had discovered Roy Lichtenstein working in the same subject matter, so Warhol looked for something new. The idea of using an object of mass consumption was something that Warhol played with throughout his career. He was fascinated with everyday objects and their role in American society. In 1962, Warhol exhibited the 32 Campbell’s Soup can paintings at the Ferus Gallery in Los Angeles. The paintings were displayed as though they were on an aisle of a grocery store. The connection to California artists in the early-60s is important because Warhol is often solely attributed to New York. Even though Warhol experimented with the image of the soup can, by contorting and altering it, these classic images are what remain the most popular and sought after by collectors.