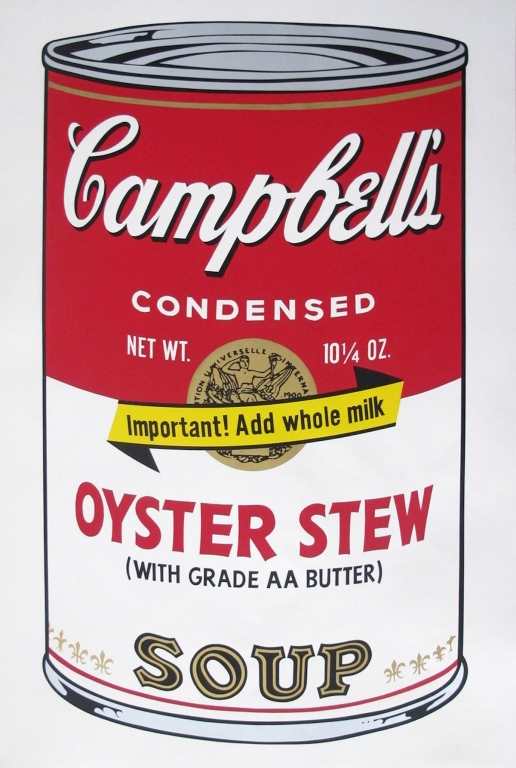 The Oyster Stew can comes from the “Campbell’s Soup II” portfolio which is comprised of 10 different prints. Oyster Stew has a yellow banner through the seal reminding the consumer to add whole milk. This additional graphic makes this print more visually interesting. Oyster Stew comes from Warhol’s original 32 Campbell’s Soup paintings. This portfolio, which is the second print portfolio that Warhol created, contains ten of the more unusual flavors from the original 32, which were all of the flavors Campbell’s Soup made in 1962. The 10 in the first portfolio were flavors like Tomato, Green Pea, Cream of Mushroom, while this portfolio has flavors like Cheddar Cheese and Scotch Broth.

Warhol’s Campbell’s Soup cans are considered to be his signature work, and even he considered them to be his favorite. Warhol continued to work with the soup cans, playing around them by contorting and altering them. However, the classic pieces, like this Oyster Stew can, are the ones that remain the most sought after and the ones most frequently desired by the market. When first creating the paintings, Warhol wanted to recreate the mechanic reproduction of the labels themselves. He further advanced his silk screening techniques to produce these prints, to make them look more as if they came from an automated process