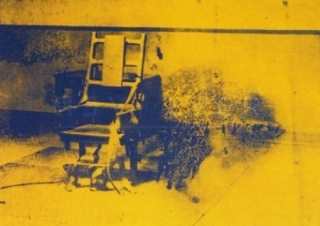 Andy Warhol created Electric Chair 74 as part as his Death and Disaster series. This portfolio depicts one of Warhol’s most controversial choices in subject matter. Depicting a lone electric chair used in penitentiary executions, Warhol forces the viewer to be face to face with the tragic loss of life that society has become numb to. This portfolio was criticized by the media for being overly controversial because it was exhibited the same year that New York’s Sing Sing State Penitentiary performed its last execution by electric chair. Featuring a background of mustard yellow, the subject matter of this print is revealed by the use of blue ink. This series is a favorite among collectors because of the strong feelings invoked from the subject matter and the bright pop art colors that Warhol employs.