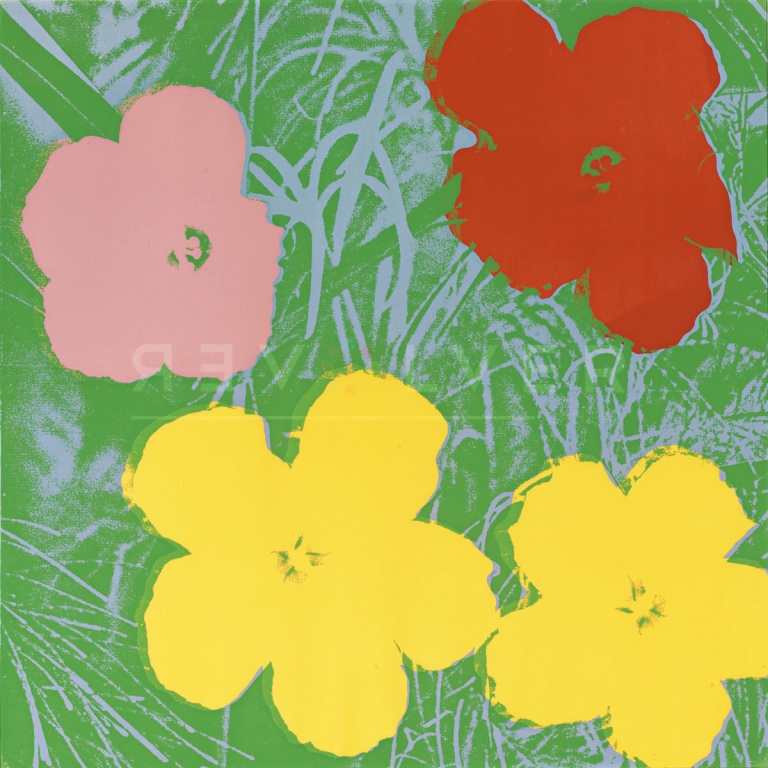 Title: Flowers, Yellow (FS II.65)
Medium: Screenprint on paper.
Year: 1970
Size: 36″ x 36″
Edition:Edition of 250 signed in ball-point pen and numbered with a rubber stamp on verso; some dated. There are 26 AP signed and lettered A-Z in ball-point pen on verso. Portfolio of 10.

Flowers 65 is a screenprint from one of Andy Warhol’s most popular series. It is well known and a favorite among Andy Warhol collectors. Many of Andy Warhol’s sources of content comes from appropriated material. Warhol would often find his imagery for his screen prints in advertisements and magazines. Based on a photograph by the nature photographer Patricia Caulfield, Warhol made prints of hibiscus flowers with petals in contrasting colors. The vibrant and bright color combinations in these works are characteristically Warhol. The artist’s choice in cropping the image into a square format gives a unique opportunity for the piece to be viewed in varying ways.

Following Andy Warhol’s famously censored work The Thirteen Most Wanted Men, which featured the mug shots of criminals, Warhol created the Flowers portfolio in the 1970s. Flowers are often representative of fragility and purity, the paintings then were a drastic departure in content following the display of The Thirteen Most Wanted Men. At the time Warhol created these works, the Flower Power movement was well established and while the artist himself was not a part of the movement, it was perhaps an influence in the making of these works. Warhol continued with floral imagery in his portfolios Flowers (Black and White) and Flowers (Hand-Colored).