Mona Smile, Indigo Gets Up (Green) 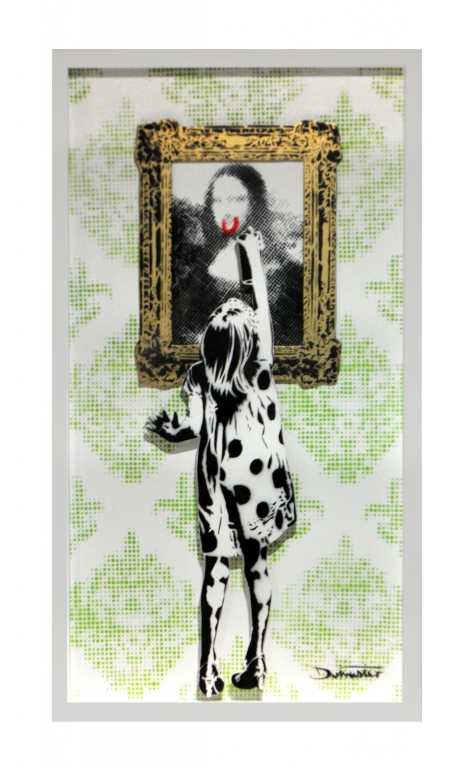 Born and raised in London, The Dotmasters is the offspring of C6.org, a new-media based collective of art-pranksters. Active throughout the 1990’s, they bridged the gap between art and activism with attention snatching events that pulled no punches. Hitting the headlines worldwide in 1997 with “Man in a box” they incarcerated and starved one of their members in a surveillance cube in a gallery in Brighton. Their work was eclectic, merging graffiti, new media and performance from the street, night clubs and galleries generating a steady stream of irreverent broadcasts.

Founding member Leon Seesix, bored of the new-media world and the group dynamic started working under the alias ‘The Dotmasters’, sideways look at a populist medium says the East London based artist. The Dotmasters possesses a typically English sense of humor, throwing two fingers up at the passer-by with his impeccably detailed stencil work.

As at home in the ghetto as he is in paradise, The Dotmasters work can be found anywhere from a pikey trailer park to thepenthouses of Europe and have featured in both Banksy’s Cans Festival in Waterloo and his Oscar nominated feature film ‘Exit Through The Gift Shop’.

A frequent collaborator with the Mutoid Waste Company, The Dotmasters love of the sinister has morphed the dark heart of the fair into a twisted set of sideshows, dubbed ‘The Unfairground’. The sideshows can be seen at festivals as far flung as Glastonbury and, Fuji Rock Festival in Japan. High striking Test Your Strength machines stand side by side of rigged knock-‘em-downs (‘The Crack Heads’) and unlikely ball-games of skill such as ‘The Gobbler’.

Recently concentrating on the High Class Trash gallery shows, completing sell out shows of absolute rubbish in Tokyo, Norway & London. Next stops on the global tour include Dubai and Los Angeles.

Other listings from Graffik Gallery

Who's That Girl
Alan Berg

My Horse For Cab
Alan Berg