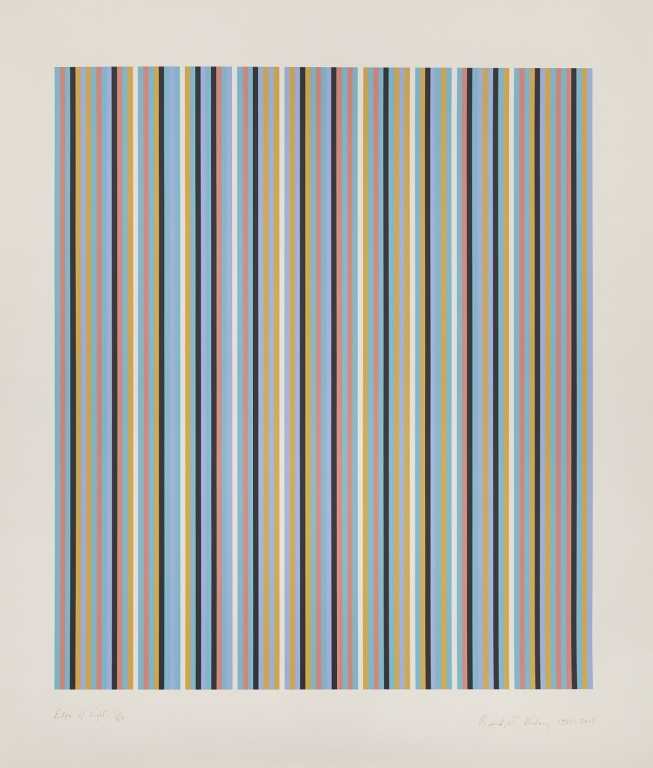 Bridget Riley was born in 1931 and studied at Goldsmith’s College and later at the Royal College of Art where her contemporaries included Peter Blake, Frank Auerbach and David Hockney. Riley first came to prominence as the foremost exponent of the British Op Art movement which aimed to create geometric abstract compositions which deliberately manipulated the viewer’s eye and created dramatic visual movement on the picture surface. Since the height of the Op Art movement in the 1960s and 70s Riley’s work has evolved dramatically with her introduction of colour into her original monochrome palette of black and white. Compositionally her work has also changed with the artist exploring different combinations of geometric forms such as stripes, parallelograms or curves. What remains constant, however, is Riley’s ability to continually create movement and visual interest across all her work.

Published in 2003 (although conceived in 1981), Edge of Light is one of Bridget Riley's most popular and sought after prints. It was published in an edition fo 85, titled, numbered, signed and dated (1981-2003) on the front. It is sold framed as seen, with perspex.

High res images are available on request, please contact the gallery with any questions.