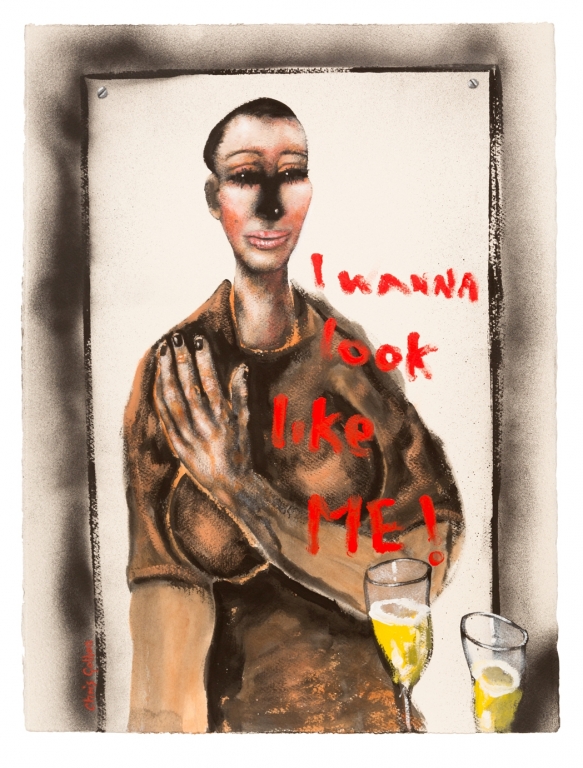 Original painting in acrylic on paper. This work has museum provenance, since it was displayed in the major museum retrospective CHRIS GOLLON: Beyond the Horizon, at Huddersfield Art Gallery 12th Oct 2019 - 18 Jan 2020, and features in the ISBN exhibition catalogue, with texts by leading writers including Thurston Moore, Nick Soulsby and Tamsin Pickeral. See our Events page for details, or on our gallery website the Exhibitions page.

This painting is also part from the Eleanor McEvoy-inspired NAKED MUSIC series. It takes its title and inspiration from a track of the same name on McEvoy's 2016 album of songs, some of which were co-written with Dave Rotheray (The Beautiful South) and with Lloyd Cole. Gollon and McEvoy in 2016 embarked on a cross-pollination of music and words, with Chris Gollon interpreting some of Eleanor's songs for a major London solo exhibition, in which her album was launched. The song 'Look Like Me' dealt with Eleanor McEvoy's experience, when she signed her first record deal in New York, and of the label's executives trying to make her alter her look and style. She left the label.

As is well documented in art historian Tamsin Pickeral's biography of Chris Gollon 'Humanity in Art', he was a very sensitive painter of women. He was also a great innovator in acrylic painting, often using printmaking techniques and spray paints. Hockney and Bacon have been criticised for flatness using acrylic, but Gollon made the medium his own by using Old Master techniques of thin glazes and washes of colour to build up the flesh tones, then innovatively adding in printmaking techniques and fine artist's spray paints. There is archive footage of him painting on the Films page or his official website www.chrisgollon.com.

London-born British artist Chris Gollon (1953 - 2017) was a very established and critically-acclaimed name in European painting, with many solo museum shows and museum acquisitions, including the British Museum. For further details on the recent books published on his work, public commissions, press coverage, visit the artist's official information website: chrisgollon.com. Holding his artistic estate, IAP Fine Art has exclusivity on Gollon's work, and we help collectors begin or expand their collections, and we also work with museums and cathedrals with regard to exhibitions and acquisitions.

'Study on Paper (VIII) for Gimme Some Wine'
Chris Gollon

Sketch for Woman Getting Ready For Bed
Chris Gollon