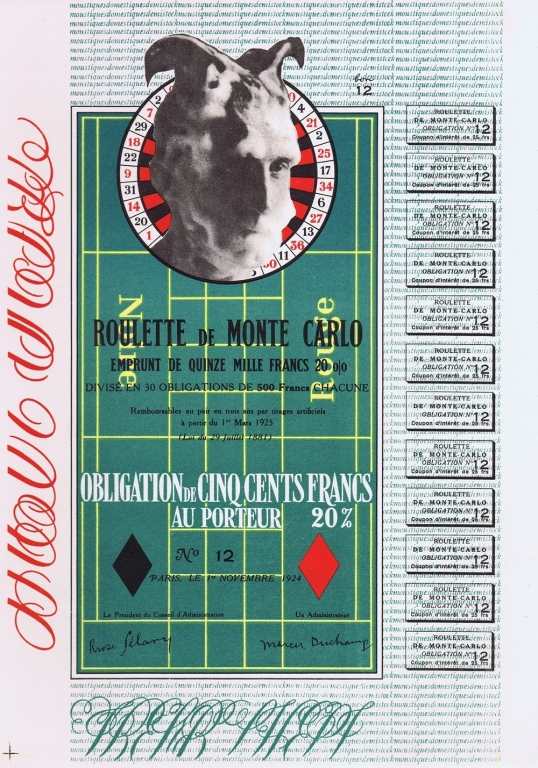 As published in XXe Siecle, 1938, by San Lazzaro with the text of the ‘Extrait des Statuts’ on the verso and staple marks in the left-hand margin. From the edition of approximately 1500. Very bright and clean impression.

The image is taken from a group of bonds originally created by Duchamp in 1924 to finance a system of wagering on roulette at Monte Carlo that he was developing. Original plans for financing of his company called for the issuance of 30 shares at an assigned value of 500 francs each. The bonds were to be repayable to investors at the rate of 20 percent interest over three years. Although thirty bonds were planned only eight of these 1924 bonds were realised. In 1938 Duchamp was asked by the editors of XXe Siècle - a lavish French art magazine - for a contribution to their publication. He readily accepted, for he was anxious to produce a facsimile of his ‘Monte Carlo Bond’ for inclusion in his ‘Valise’. Duchamp prepared a full-scale color lithograph of bond no. 12, which had not yet been stamped or signed, and copies were run off and included in the Christmas issue of the magazine.

The bond features a diagrammatic, overhead view of a roulette table, crowned at the summit by a portrait of Duchamp taken by his close friend and confidant Man Ray. In this comical portrait, Duchamp is literally "transformed through shaving cream" into what Joselit terms a "chimerical figure, perhaps resembling a faun or devil...". ‘Monte Carlo Bond’ also incorporates Duchamp's interest in linguistics and punning. The nonsensical pun "moustiques domestiques demistock" (translating as "domestic mosquitoes half stock") is repeated continuously in the backround of the piece. At the bottom are the printed signatures of both Marcel Duchamp and his alter-ego Rrose Selavy.

Other listings from Gerrish Fine Art

'The Tear that Falls', Etching, Aquatint and Silkscreen, 1974
Victor Pasmore