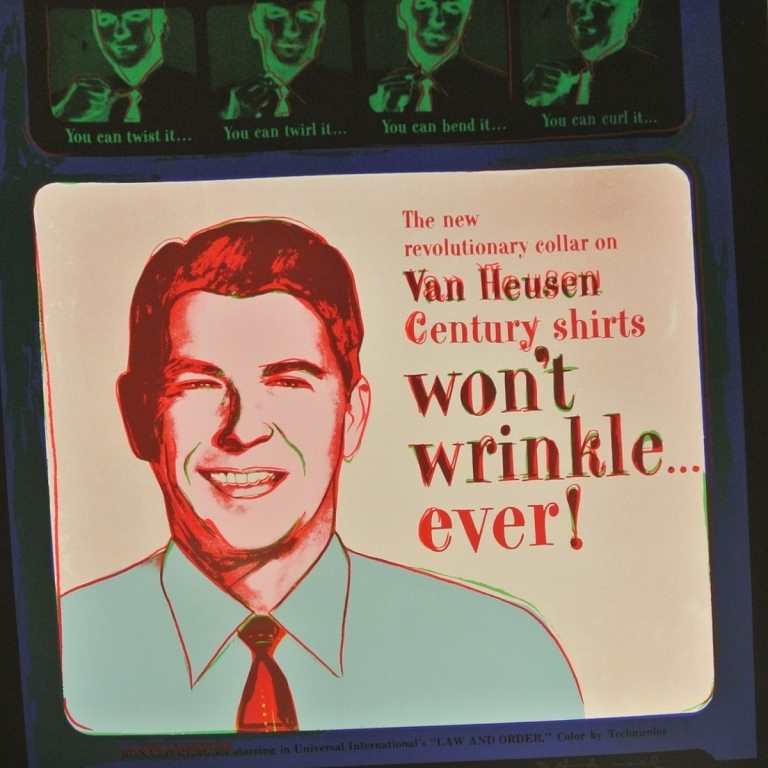 Andy Warhol created Van Heusen 365 for his Ads portfolio in 1985. This work features former United States President Ronald Reagan from an ad campaign while he was still an actor in the ‘50s and ‘60s. Modeling Van Heusen dress shirts, Ronald Reagan is depicted smiling next to their tagline, “Century shirts won’t wrinkle ever!” Andy Warhol found inspiration in this advertisement because he thought it was an ironic depiction of the man who would become president years after this advertisement ran. The Ads portfolio depicted images from popular advertising campaigns and prominent logos in contemporary American pop culture. Warhol was drawn to this subject matter because he began his career in commercial advertising and throughout his career he returned to the subject matter of pop culture. For this portfolio Warhol chose images that not only were meant to sell products, but they also contained images that were relatable to the average American consumer. Including images of the Paramount, Apple, and Mobilgas logos, Warhol created a portfolio that was easily recognizable. Also included in the series were images of pop culture stars like Ronald Reagan in Van Heusen apparel and Judy Garland for Blackglama Fur.