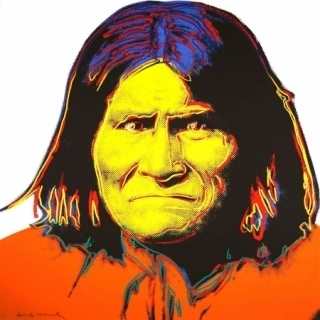 Andy Warhol created Geronimo 384 in 1986 for his Cowboys and Indians portfolio. The image, based on an iconic photograph of the Apache leader, combines two of Warhol’s thematic preoccupations. It is exemplary of the pop artist’s controversial approach to portraiture while at the same time belonging to his exploration of representation in the media. Andy was fascinated with the way the history of the American West is romanticized and retold in popular culture. Removed from his historical context, Geronimo looks as if he is posing for a photograph. While the portrait exudes complacency, the Apache leader is historically known for leading Native Americans in territorial wars against encroaching colonialism. Andy Warhol gave Geronimo a pop art makeover, depicting him in vibrant shades of orange, blue, and yellow typically associated with western themes.