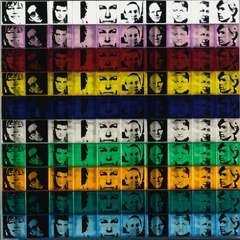 PORTRAITS OF THE ARTISTS (FS II.17)

The configuration in each set of portraits can very well be in different orders as the frame of the work can be opened up and the boxes are movable. It was during this time that Warhol was continuing to push the boundaries past painting and into sculptural more 3-D work. As opposed to Warhol’s Brillo Boxes, where we don’t know all of the ways that the sculptures have been posed, we do know the history of configurations in Portraits of the Artists. The work itself has a way of keeping records on how the boxes were arranged. Twentyfive of the editions are lettered A-Y and are printed on one of the boxes with Warhol’s portrait. Within this seemingly chaotic piece of artwork, Warhol still insists that there is a method to his madness.

PORTRAITS OF THE ARTISTS (FS II.17) AS PART OF ANDY WARHOL’S LARGER BODY OF WORK

Warhol was part of a very exclusive group of artists that the famous and influential New York dealer, Leo Castelli, represented. In 1967 Castelli hosted an exhibition to celebrate the tenth anniversary of his Upper East Side gallery. Warhol was chosen to create portraits of 12 of Castelli’s artists, many of whom were Warhol’s friends. Sticking with Warhol’s signature style of repetition, he multiplied the artists’ portraits ten times in ten different colors on 3-D polystyrene boxes. Measuring at approximately 2” x 2”, these boxes were so small that it is said that a few of them were possibly stolen from the opening.

The 100 boxes totaled to approximately 20” x 20” when lined up. The artists shown are Jasper Johns, Robert Rauschenberg, James Ronsenquist, Frank Stella, Donald Judd, Roy Lichtenstein, Robert Morris, Lee Bontecou, Larry Poons Cy Twombly and John Chamberlain. Since the exhibition, Twombly and Chamberlain have been removed from the portrait in order to create a perfect 100-box print. Although it is unknown why Twombly was taken out of Portraits of the Artists, it is especially curious that Warhol omitted Chamberlain because Warhol collected his work and was a big fan of his. It is said that he possibly could have over done it with Chamberlain portraits as Warhol had traded 315 of the portraits to him who created his own rectangular work called 315 Johns.