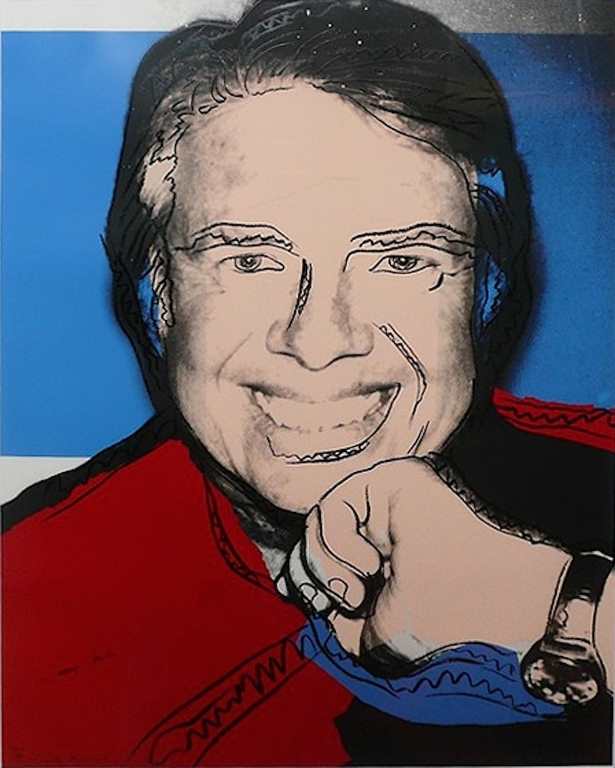 JIMMY CARTER II 151
Warhol was commissioned by the Democratic National Committee to design a portrait for Jimmy Carter’s presidential campaign. By employing Warhol as the artist, Jimmy Carter hoped to reach out to the younger voters and the voters of New York, thus utilizing Warhol’s status as a pop culture icon to his advantage. This strategic move by the hopeful Democratic was an attempt to position himself as a progressive candidate. This portrait shows Jimmy Carter with a gleaming smile, perhaps to appeal to his voters. Warhol added his own touch by embellishing the print with rich red and blue, and a peach color for Jimmy’s face and hand.

JIMMY CARTER II 151 AS PART OF ANDY WARHOL’S LARGER BODY OF WORK
Warhol was fascinated by the ambiguous boundaries between politics and the realm of the star-studded. As a result, he contributed his own interpretation by mixing the two seemingly disparate realms. He instilled a sense of celebrity into his portraits, including those of politicians such as Jimmy Carter. By adding bright colors and graphic elements, he beautified the facial features so as to bring stardom and publicity into political campaigns.