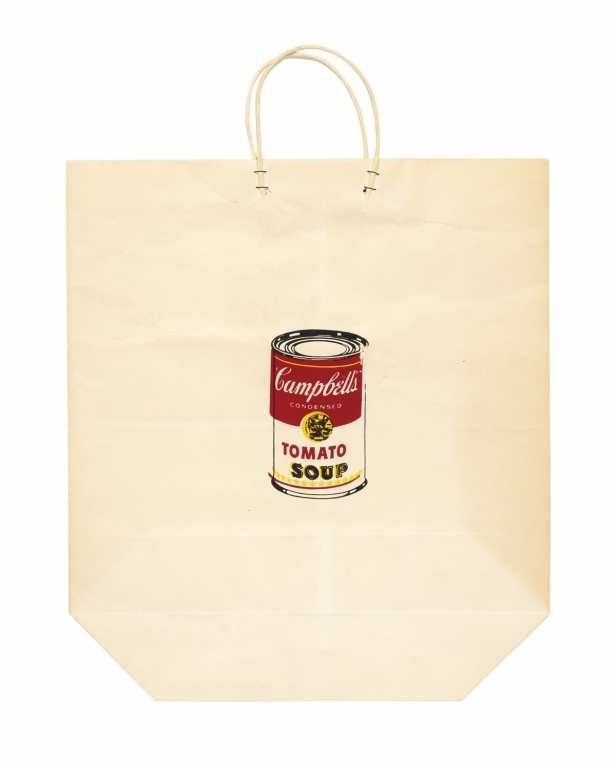 CAMPBELL’S SOUP CAN 4
Andy Warhol’s Campbell’s Soup Can (Tomato) 4 and his portfolios depicting Campbell’s Soup cans is arguably his most iconic and widely recognized series of artwork. In this collection, Warhol takes the ever-present American pantry staple and transforms it into high art. Warhol, originally a commercial graphic artist, found the imagery of the Campbell’s Soup label a powerful visual tool, since the design had remained successfully unchanged for decades. This bag was created in 1964 for the American Supermarket Exhibition at the Bianchini Gallery.

CAMPBELL’S SOUP CAN 4 AS PART OF ANDY WARHOL’S LARGER BODY OF WORK
Campbell’s Soup Can (Tomato) 4 and the rest of the series were a legitimate subject as a modern still life during the postwar American economy. First shown at the Ferus Gallery (Los Angeles) in 1962, the exhibit started as a series of paintings that eventually led to his success in the future. Furthermore, Warhol had just started to experiment with screenprinting a few years prior, which was a medium that would change the art world forever. Some of the most famous and recognizable images in art history come from Warhol’s Campbell’s Soup series because of his screenprinting process and decision to depict banal subject matter, which helped redefine and complicate the concept of high art. This series helped to usher in the Pop Art movement that endures today, renewed and rediscovered by artists such as Damien Hirst and Jeff Koons.