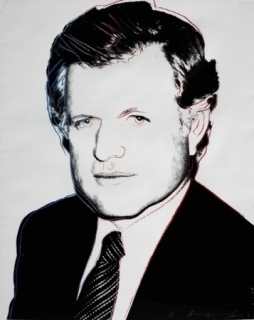 EDWARD KENNEDY 240
The print of Edward Kennedy 240 was produced to raise funds for Kennedy’s 1980 Democratic campaign for President. Continuing his elder brothers efforts in public service, Edward Kennedy ran for the Presidential office in 1980. Andy Warhol produced the portrait of Edward Kennedy in an effort to help raise funds and support for his Presidential campaign. Although Kennedy didn’t go on to win the Democratic nomination, despite high expectations, he continued to pursue politics and became known as The Lion of the Senate. While in office, Kennedy wrote hundreds of bills that were passed and enacted into law. Warhol was known for his love of all things celebrity and glamour.

EDWARD KENNEDY 240 AS PART OF ANDY WARHOL’S LARGER BODY OF WORK
Along with this silkscreen, Warhol also produced images and works of President Kennedy and Jacqueline Kennedy. The image of Edward Kennedy comes from a Polaroid taken by Warhol. Warhol would use Polaroid photographs to help create and inform his large-scale portraits of celebrities and pop culture icons.