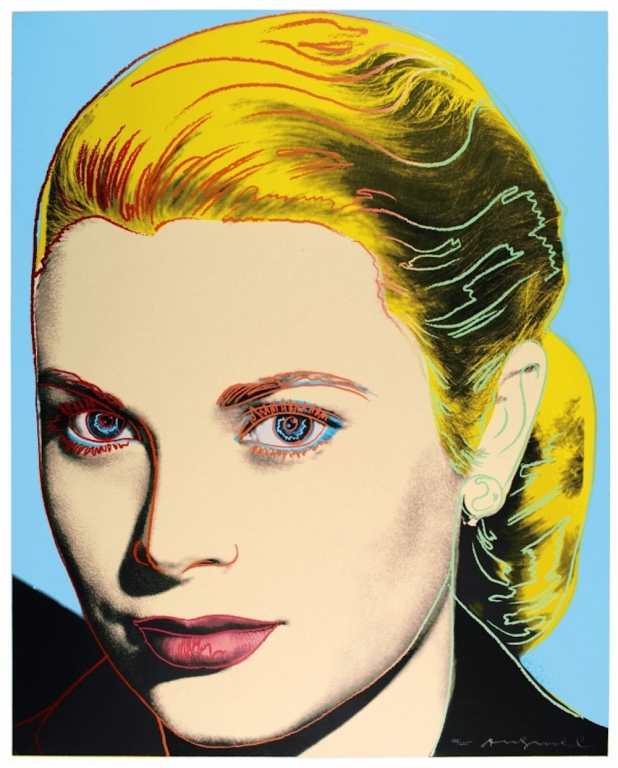 GRACE KELLY 305
Grace Kelly was an American film actress and Princess of Monaco. In 1950, at the age of 20, Grace Kelly appeared in New York theatrical productions and over 40 episodes of live drama productions. In 1953, she became a movie star with the premiere of Mogambo, but retired shortly afterwards when she married Prince Rainier. Grace Kelly is well known for her beauty and elegance, which is captured in this portrait with Warhol’s attention to her perfectly slicked back hair, plump red lips, and almost pristine glow to her skin. She has been regarded as one of the top ranks in the list of top female stars in American cinema.

GRACE KELLY 305 AS A PART OF ANDY WARHOL’S LARGER BODY OF WORK
After the success of the Campbell’s Soup series in the early 1960s, Warhol began creating screenprints of movie star and celebrity portraits including well known American pop culture figures like Marilyn Monroe, Elvis Presley, and Elizabeth Taylor. He often created these iconic works in honor of these stars after their deaths. Warhol completed this portrait of the Grace Kelly two years after her tragic death at the age of 52. This piece was completed for a fundraiser for the ICA, the Institute of Contemporary Art, which was the university museum of Philadelphia. Grace Kelly was born in Philadelphia and her parents were active participants in the university community, making the dedication of this artwork very sentimental.