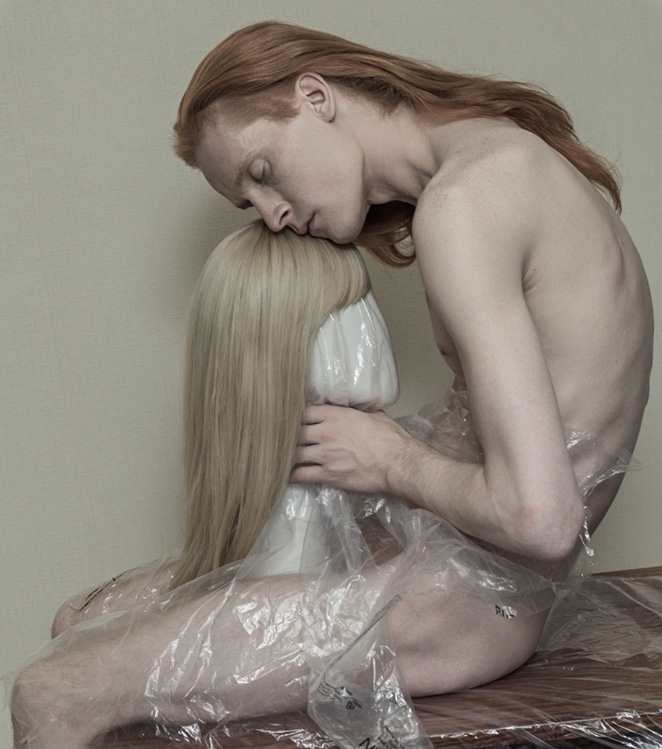 VOLLIPSIS series by Alina Karo
The title of the show, Vollipsis, bears a hint of mystery. By merging the meanings of two words - Volute + Ellipsis – the authors not only defined the symbolism of their col- laboration, adding the cinematographic references to each other’s’ roles, but also pre- sented the story made of 25 photographs in a spiral formation visible for both of them.
The conscious elusiveness and inexhaustibility of artists’ intention does not deconstruct the content of the story and at the same time highlights the cinematic side of the project. Vollipsis is a film with different plots, where in the end the paths of all main characters inter- cross and they all appear to be connected by the same story, which ties them into solid cause- and-effect relationship. Each photograph, as well as each episode has a title and a description.
In her first solo project the photographer Alina Karo in collaboration with her muse, a stylist and a model Danila Polyakov, investigates the matters of her concern in the nowadays society and the world around us. Among them are contemporary modes of social behavior in different strata of the society, the relations between a man and a woman, unity and opposites struggle, the environment contamination, the romantic memories of childhood and the irony about the new trendy practices of spirituality, which walk hand in hand with the actual oblivion, exhibitionism and the overall people’s striving towards glamour, luxury and the cult of the beautiful body.
The only non-random element of the story, told by Karo through her photographs, appears to be a usual plastic bag – the shell of the total consumerism, which is the integral part of our “universe”.

Nude on a Ledge
Lucien Clergue