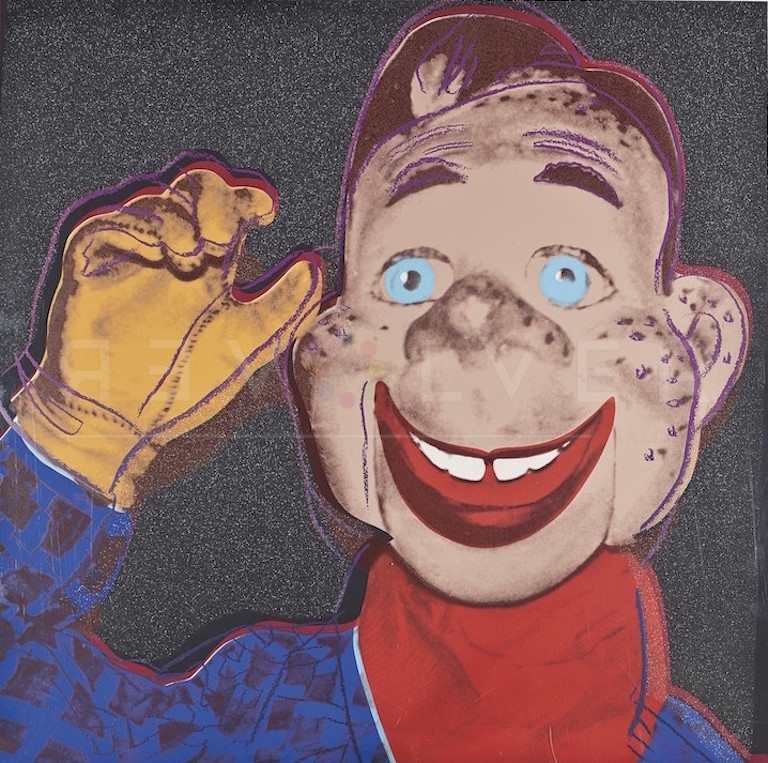 HOWDY DOODY 263
A remarkably sought after image, Howdy Doody is one of ten screenprints in Warhol’s 1981 Myths portfolio. Unlike many of his well-known works, Warhol’s reproduction of Howdy Doody’s image is not appropriated from the mass media but instead based on a photograph of the original Howdy Doody taken by Warhol, himself. It is stamped in black on verso and bears the printer’s chop mark.

HOWDY DOODY 263 AS PART OF ANDY WARHOL’S LARGER BODY OF WORK
Howdy Doody 263, is a part of ten screenprints in the Myths series that exemplify Warhol’s unerring sense for the powerful motifs of his time. Most of images in Warhol’s Myths series are taken from 1950s television or old Hollywood films. They portray the universal view of America’s once captivating and commanding past. Other pieces included in the series are characters loved by children such as Mickey Mouse and Santa Claus, as well as fictional figures like Dracula, The Wicked Witch of the West, and Uncle Sam. Every character in the Myths series is meant to represent a different facet of Andy Warhol’s personality. Andy Warhol created the Myths series during the early 1980s, arguably his most prolific period. During this time, Warhol was perfecting his screenprinting methods and making extremely intricate works. Other series produced during this time are the Shoes series, Ten Portraits of Jews of the Twentieth Century series and Endangered Species series.