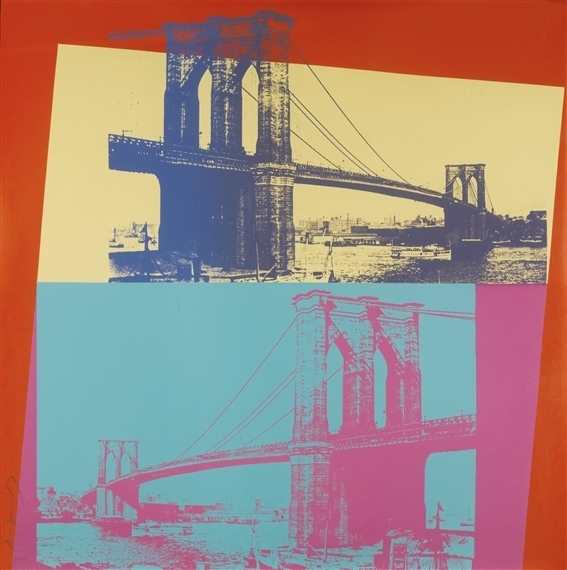 BROOKLYN BRIDGE 290
Warhol’s Brooklyn Bridge multi color screenprint demonstrates the color block technique as well as multi-layer runs of the subject to create a three dimensional aesthetic. Warhol divides the piece in half to create two angles of the bridge, which keeps the eye engaged all throughout the work and veers away from a traditional depiction of a monument in his style of Pop Art. His use of bold colors such as red, blue, green and black for shadowing create a harmony and a depth within the print. Warhol used a photo based printing technique to create this piece, where a photo taken of the subject is exposed in a darkroom to the screen itself. Similar to darkroom photography, the image is then exposed onto the screen print in a way that the artist is able to print in as many runs as necessary. This also allows the artist to change the color of ink in which the next layer will be printed on the same piece. This iconic work was created to celebrate the Brooklyn Bridge’s 100th Anniversary as Warhol was commissioned by the Brooklyn Centennial Commission to commemorate the bridge’s centennial. Warhol’s powerful image simulates the opposing viewpoints by dividing the picture plane into a top and bottom half, which creates two landscape compositions in one piece. Warhol’s depiction of the bridge gives a playful humor to the celebration of the structure in his distinct style and was successful in that Warhol’s image served as the official artwork for the citywide event.

BROOKLYN BRIDGE 290 AS PART OF ANDY WARHOL’S LARGER BODY OF WORK
Two other prints of the Brooklyn Bridge were based on a photograph courtesy of the Museum of the City of New York, and mirrored the half and half composition but switching the color palette as Warhol was known to do within his larger bodies of work. Unlike his other series, for example, Endangered Species, where Warhol printed the portrait of the animal centered, he decided to use an offset printing technique for the Brooklyn Bridge series, which is aesthetically different from his normal works. Although we have seen the color blocking in works from the series of Ten portraits of Jews of the Twentieth Century 1980, we are introduced into a more complicated offsetting of the subject printed next to it’s first run. Warhol creates dimension by tricking the eye into seeing layer on top of layer of bold color. Within these blocks are printed multiple layers of the bridge which allows the eye to move around to notice the entire piece. The image emphasizes bold right angles and lines of the bridges construct. The bridge is printed in a way that it jets off into the distance, where it’s beginning and ending are ambiguous.