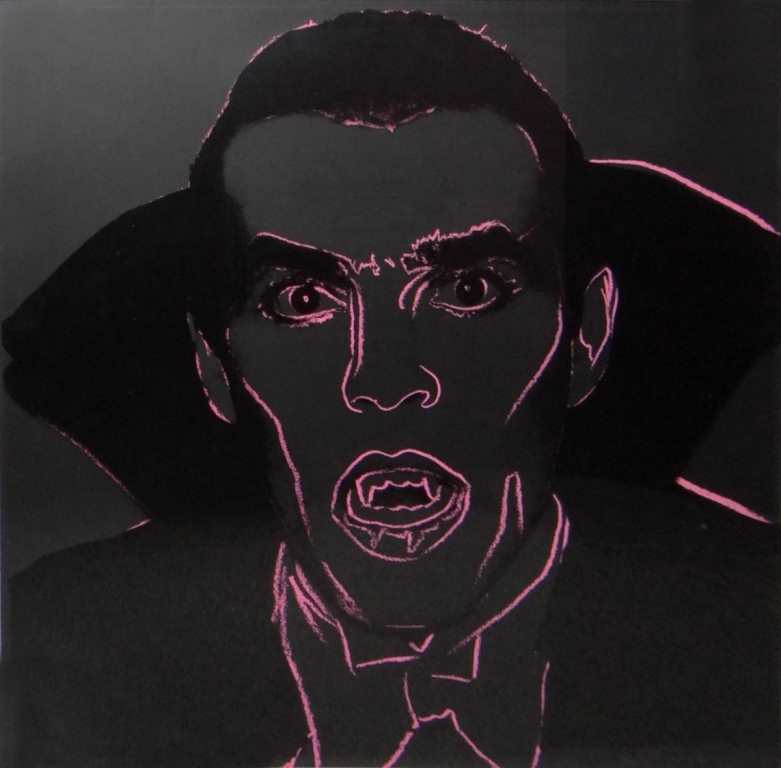 DRACULA 264
Warhol’s interest in this subject can be traced back to 1974, when he produced a film entitled Blood for Dracula, which was directed by Paul Morrissey. The film was a witty spoof on the various Dracula tropes, interspersed with homoerotic sex scenes and outrageous violence. The film has since become become a cult classic.

DRACULA 264 AS PART OF ANDY WARHOL’S LARGER BODY OF WORK
Warhol began building his portfolio collection titled Myths in 1981, however his fascination with this particular subject did not start there. His 1963 screenprint on plexiglass called The Kiss depicted a movie still of Bela Lugosi as Dracula about to bite his victim. This print is a part of ten screenprints in the Myths series that exemplify Warhol’s unerring sense for the powerful motifs of his time. Most of images in Warhol’s Myths series are taken from 1950s television or old Hollywood films. They portray the universal view of America’s once captivating and commanding past. Other pieces included in the series are characters loved by children such as Mickey Mouse, Howdy Doody, and Santa Claus, as well as fictional figures like The Wicked Witch of the West and Uncle Sam. The Myths portfolio contains ten images and each is perceived to be a different side of Warhol’s personality. His friends fondly nicknamed him “Drella”, a combination of Dracula and Cinderella.