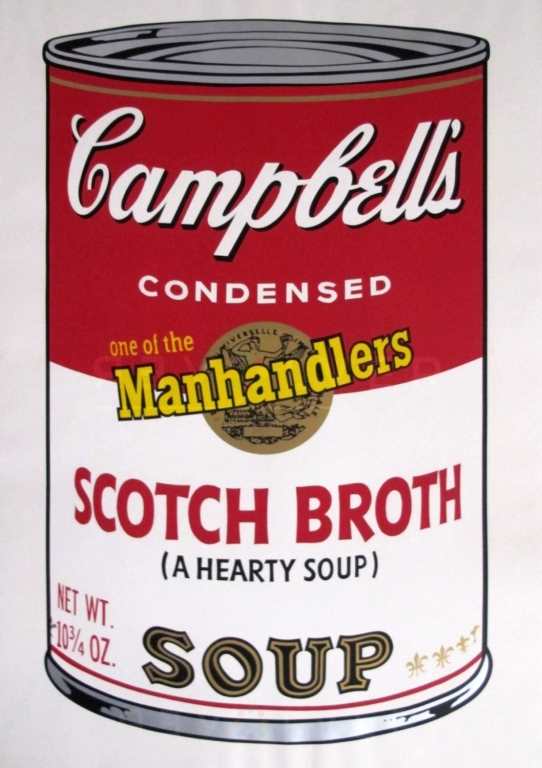 CAMPBELL’S SOUP II: SCOTCH BROTH 55
Warhol’s Campbell’s Soup II: Scotch Broth 55 is one of ten prints from his Campbell’s Soup IIportfolio, which follows his first portfolio of Campbell’s Soup can imagery. In this collection, Warhol takes the ever-present American pantry staple and transforms it into high art simply by exactly mimicking the cans’ label. The second portfolio contains ten of the more unusual flavors from the original 32 that Warhol created in 1962, which were all real flavors of Campbell’s Soup cans. These ten prints are slightly more unique than those in the first print portfolio because of the more unusual flavors and added graphics on their labels, which make them visually stand out.

CAMPBELL’S SOUP II: SCOTCH BROTH 55 AS PART OF ANDY WARHOL’S LARGER BODY OF WORK
Warhol’s collection of prints representing Campbell’s Soup cans is arguably his most iconic and widely recognized series of artwork. The Campbell’s Soup portfolios represent many themes that Warhol continues to work with throughout his career, including the powerful role that mass consumption plays on postwar society. The semi-mechanized process he used to create his works is something that is characterized with Warhol. His Campbell’s Soup series helped to usher in the Pop Art movement that endures today, renewed and rediscovered by artists such as Damien Hirst and Jeff Koons.