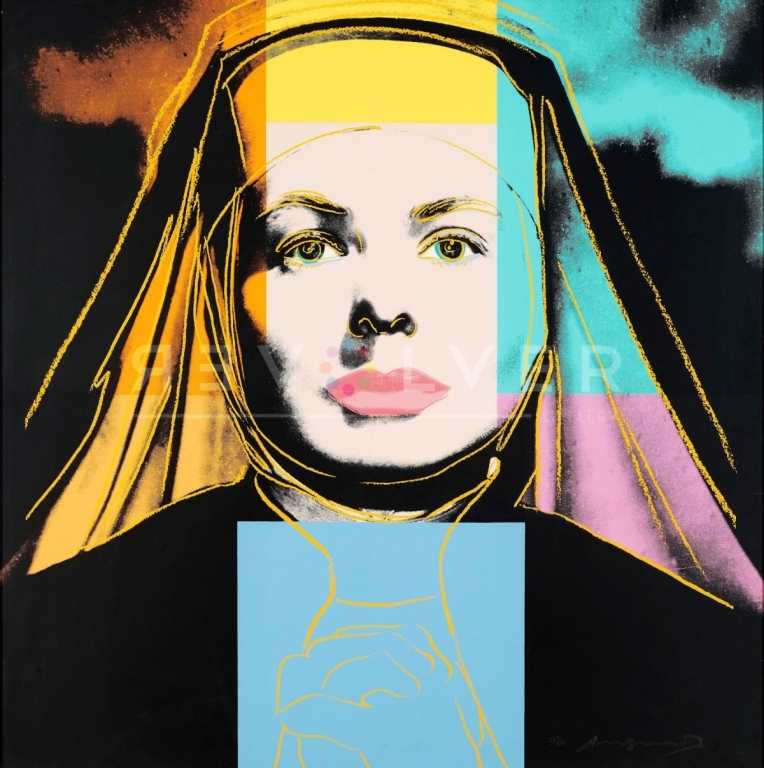 THE NUN, INGRID BERGMAN 314
The Ingrid Bergman series is made up of three types of screenprints of the Academy Award-winning actress in 1983. The source images used for these portrait pieces include a movie still from her role the 1942 film in Casablanca (With Hat), a movie still from the 1945 film The Bell of St. Mary’s (The Nun) and also a publicity photo (Herself). The screenprints are printed on Lenox Museum Board and were done by request of a Swedish art gallery. The portfolio was printed by Rupert Jason Smith in New York and published by Galerie Borjeson, in Malmo Sweden.

The Nun, Ingrid Bergman 314 by Andy Warhol is part of Warhol’s Ingrid Bergman portfolio. Taken from the 1945 movie The Bells of St. Mary, the character Sister Mary that Bergman played was seen as one of her most severe roles. The vibrant color palette is made even more dynamic with Warhol adding an exciting element of abstraction with the yellow lines that outline her figure and make up her hands, clasped in prayer.

THE NUN, INGRID BERGMAN 314 BY ANDY WARHOL IS PART OF A LARGER BODY OF WORK
After the success of the Campbell’s Soup series in the early 1960s, Warhol began creating screenprints of movie star portraits including Marilyn Monroe, Elvis Presley, and Elizabeth Taylor. This print is indicative of Warhol’s obsession with all things relating to fame, especially movie stars. His fascination with pop culture spilled over into his creative output, which is evident by his prints of movie stars, Campbell’s Soup cans and political figures. His art is a visual recording of the culture of his time.