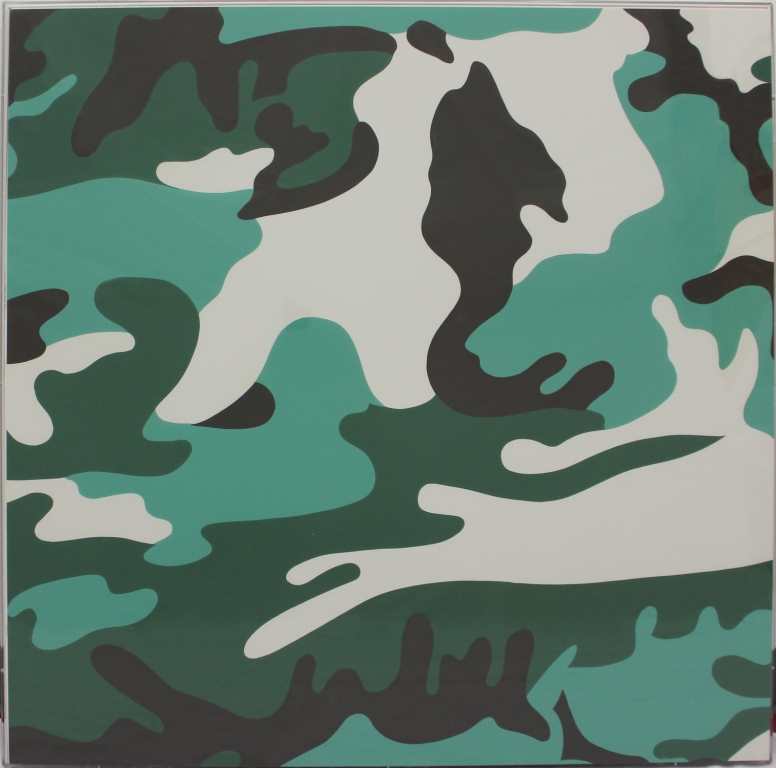 CAMOUFLAGE 406
Camouflage 406, is the first screenprint in Andy Warhol’s eight print series. It is one of the most recognizable as the pattern is used for American military uniforms. While Warhol distinguishes his prints from the source with the imposition of his trademark bright colors, this print’s colors most closely adhere to the pattern’s source which is characterized by a variation of dark and light greens. He also adds stark white accents, making the print more abstract looking than a simple recreation of the militaristic pattern.

CAMOUFLAGE 406 AS PART OF ANDY WARHOL’S LARGER BODY OF WORK
The Camouflage portfolio was the last set of prints Andy Warhol published before his death the same year. His assistant, Jay Shriver, had shared with Andy that he was working on abstract paintings by pushing paint through the mesh of military cloth and immediately Andy became inspired. He had Shriver run down to the local New York army surplus store near Union Station to buy some camouflage fabric. As soon as Jay had returned with the fabric, the fabric was photographed and the mesh was removed to only reveal the shapes and patterns of the fabric. Changing the originally dreary military color scheme to vivid ‘60s psychedelic colors, Warhol appropriated the composition of camouflage into striking abstract pieces of pop art. Warhol died the same year the Camouflage portfolio were printed and was not given the opportunity to sign these. While still alive, Warhol had the opportunity to exhibit the Camouflage screenprints only once at a group show in New York, 1986.