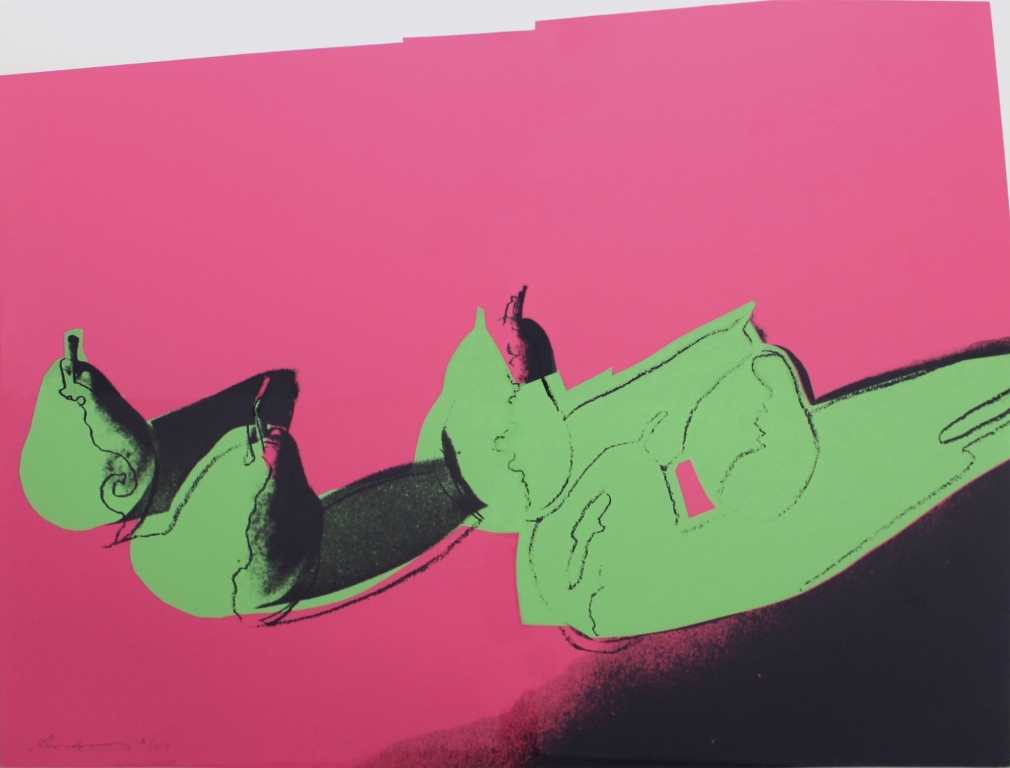 SPACE FRUIT: PEARS 203
Pears 203 exemplifies Warhol’s modern approach to the still life genre. With its bright colors of green and pink, Warhol demonstrates more interest in the drawing’s vibrancy than its realism. His use of shadow and detailed lines on the pears gives the fruit more of a realistic quality as they become more 3-Dimensional. With the help of printer, Rubert Jasen Smith, Warhol was able to complete his Space Fruit series in 1979.

Warhol’s series of Space Fruit is a perfect example of Warhol taking well-known subject matter and putting a pop art spin on them. Still life compositions are essentially choreographed as the artist places the objects and light exactly as he or she wishes. This manipulation is what this series has in common with his Flowers and Skulls series.

SPACE FRUIT: PEARS 203 AS PART OF ANDY WARHOL’S LARGER BODY OF WORK
This series marks a shift of Warhol’s interest from commercial products to art historical subjects. Warhol takes the same approach to his Space Fruit series as he does to his Flowers and Skulls series, taking traditional props and isolating each element in some of his most famous portfolios.

Throughout his career, Andy Warhol worked with assistants and printers to create numerous print portfolios. In 1977 he met printer, Rupert Jasen Smith, who worked with him to create the series Space Fruit. These prints demonstrate Warhol’s experimentation with a the classical tradition of the still life. Still lifes by their very nature are choreographed compositions focusing on shape, color, space and oftentimes symbolism. For centuries, artists used the study of a composition including fruits, vegetables, glasses of water and insects to display their artistic virtuoso.