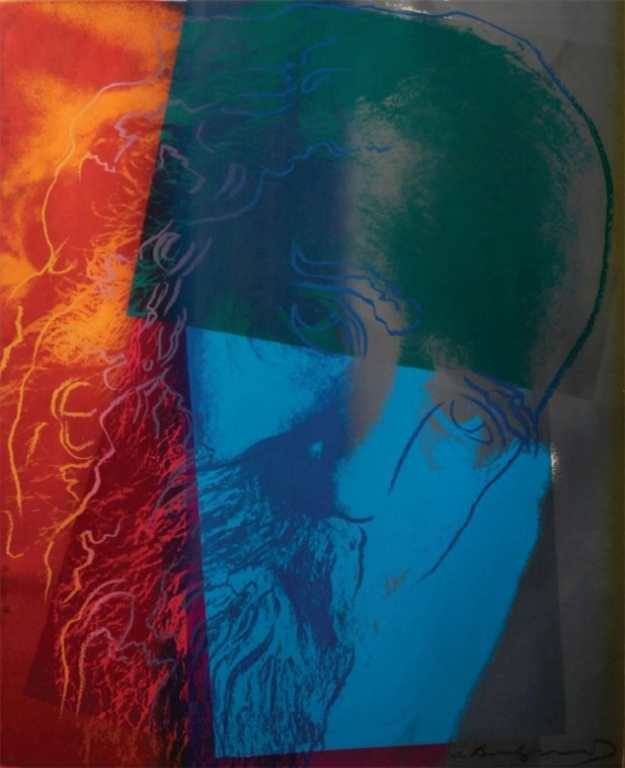 WARHOL MARTIN BUBER 228
In 1980, a publisher in Tel Aviv asked Warhol to create a portfolio of the ten most important Jewish figures of all time. Warhol created the series and fondly called them his “Jewish Geniuses.” Warhol selected Martin Buber (1878 – 1965), the famous Hasidic scholar and philosopher, to be represented in the series. Buber’s metaphysical writings, as well as his retelling of Hasidic tales have made him one of the most popular Jewish scholars of all time. His involvement in the founding of the State of Israel, also makes him, for many, one of the fathers of the modern Israeli state.

WARHOL MARTIN BUBER 228 AS PART OF ANDY WARHOL’S LARGER BODY OF WORK
Warhol became fascinated with a group of influential Jewish figures – a pantheon of great thinkers, politicians, performers, musicians and writers, including renowned philosopher and educator Martin Buber (1878-1965). Martin Buber’s famous portrait is featured alongside others such as Sarah Bernhardt, Louis Brandeis, Einstein, Sigmund Freud, George Gershwin, Franz Kafka, the Marx Brothers, Golda Meir, and Gertrude Stein in the Ten Portraits of Jews of the Twentieth Century series. The collective achievements of these famous Jews changed the course of the twentieth century and may be said to have influenced every aspect of human experience.