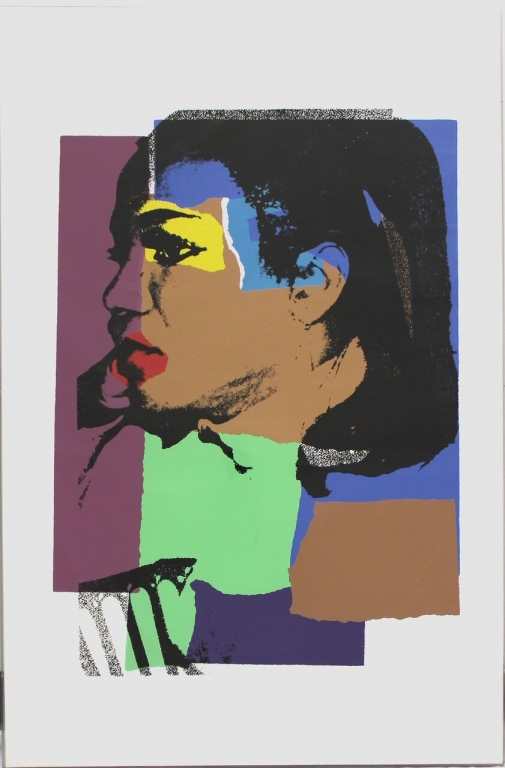 LADIES AND GENTLEMEN PORTRAIT 129
Ladies and Gentlemen Portrait 129 by Andy Warhol is part of his Ladies and Gentlemen series that tackled the socio-political issues of cross-dressers. This print features a photo portrait and is transposed by blocks of color, emphasizing the glamorous and eccentric nature of crossdressing men and women.

LADIES AND GENTLEMEN PORTRAIT 129 AS PART OF ANDY WARHOL’S LARGER BODY OF WORK
The Ladies and Gentlemen series is comprised of portraits of cross-dressers from a New York City nightclub called, The Gilded Grape. Warhol took the cross-dressers’ portrait with a Polaroid Big Shot camera and then transferred the image onto silk screen. This was the same process he used on celebrities and other famous figures. Warhol told the cross-dressers to dress and pose however they wished. None of the subjects are famous but Warhol brings out the style and glamour in each portrait. The idea for the the Ladies and Gentlemen series, consisting of images of drag queens, came from a protegeé of art dealer Alexander Iolas named Anselmino, who had previously commissioned Warhol to do an edition of one hundred prints of Warhol’s Man Ray portrait. When Warhol went to Torino to sign the prints, Anselmino suggested he do a series of drag queens, suggesting portraits of Jackie Curtis, Holly Woodlawn and Candy Darling – not realizing that Candy Darling was dead. Instead, Warhol used models found at the The Gilded Grape on West 45th Street, frequented by Black and Hispanic transvestites.