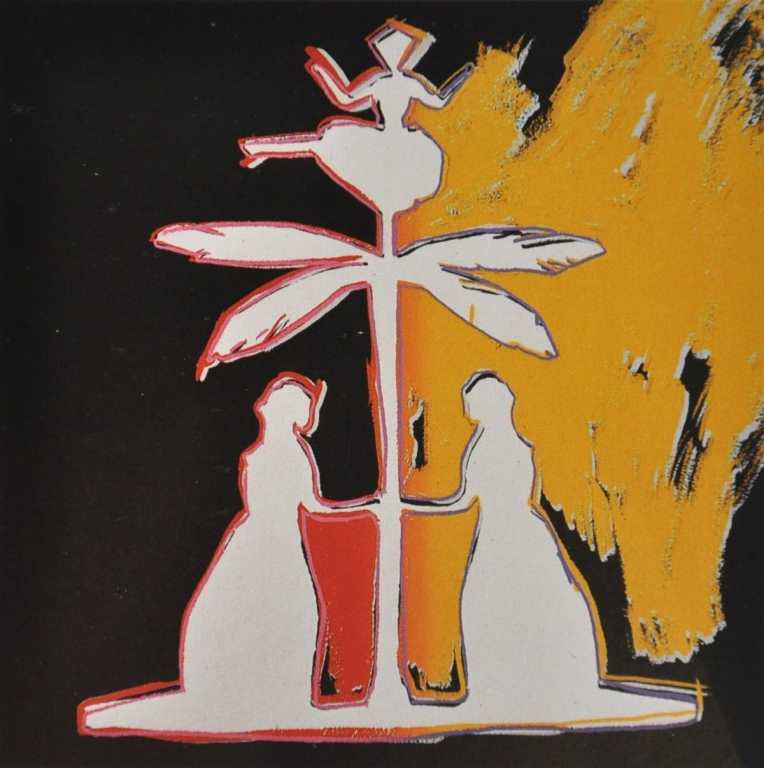 HANS CHRISTIAN ANDERSEN FS II.399
Warhol’s Anderson series showcases a central composition of mirroring figures in what seem to be women holding onto a tree form with an image of a ballerina at the top of the image. In these works, Warhol minimizes his color palette to about 3 colors all printed flat on paper. The folk art inspired work within this series does not give the viewer a distinct portrayal of who the figures and objects actually are, but instead uses the title, Hans Christian Anderson, to refer us to the Danish author who is best remembered for his fairy tales that expressed themes that transcend age and nationality. Some of his famous tales include The Little Mermaid, The Snow Queen, The Ugly Duckling and The Nighingale. His stories have not only inspired Warhol in this series, but have inspired plays, ballets, and both live-action and animated films. Warhol’s playful renderings of scenes from these tales portray a childlike depiction of scenes that could represent scenes from his various stories.

HANS CHRISTIAN ANDERSEN FS II.399 AS PART OF ANDY WARHOL’S LARGER BODY OF WORK
Warhol succeeded in translating these images and capturing Anderson’s genius for humor and beauty in his fairy tale stories. A repeated portrait was also created of the author in the single print. The mirroring we see in the fairy tale renderings was humorously translated in the authors’ own portrait of his body appearing twice. This keeps the work consistent within the series using technique that appears in each of the other works. Warhol seemed to be inspired by powerful figures of all sorts from leaders to authors. He documents these figures well in each series in his bold Pop Art style, which seems to work for every icon he has printed.