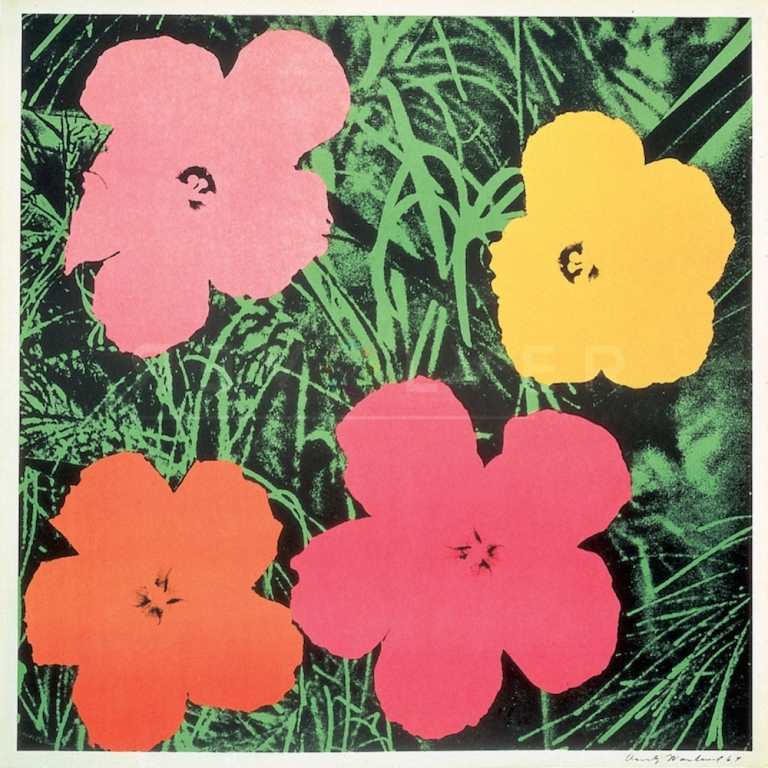 FLOWERS 6
Flowers 6 by Andy Warhol was the first print that Warhol published for his Flowers series. It was published to coincide with a Warhol exhibition at the Leo Castelli Gallery in New York that occurred from November 21 through December 17, 1964. The print came from a photo by nature photographer Patricia Caulfield that was found in the June issue of Modern Photography. Like in many of his works, Warhol appropriated an image, cropped and abstracted it, and then played around with the colors. The exhibition that this print was created for featured seven monumental-scale paintings featuring the same subject. The show was a sell-out even though it was such a departure from Warhol’s standard subject matter. This particular print features two pink flowers, a yellow flower, and an orange flower on green grass. The photograph was of Mandrinettes, which is a highly rare hibiscus flower.

FLOWERS 6 AS PART OF ANDY WARHOL’S LARGER BODY OF WORK
Like many of Warhol’s works, Flowers 6 was appropriated from a magazine. Warhol commonly sourced images from advertisements, magazines, and newspapers. What makes it particularly unique is that they are far from his usual mass-media, commercial imagery. With this print, he inverted the image, which is something he commonly did, and then personalized the prints using watercolor dyes. Flowers are one of the only subjects that he continuously revisited throughout his entire career in almost all mediums. Six years after this print was released, he released a portfolio of ten screenprints that were very similar in composition and has become one of his most popular series.