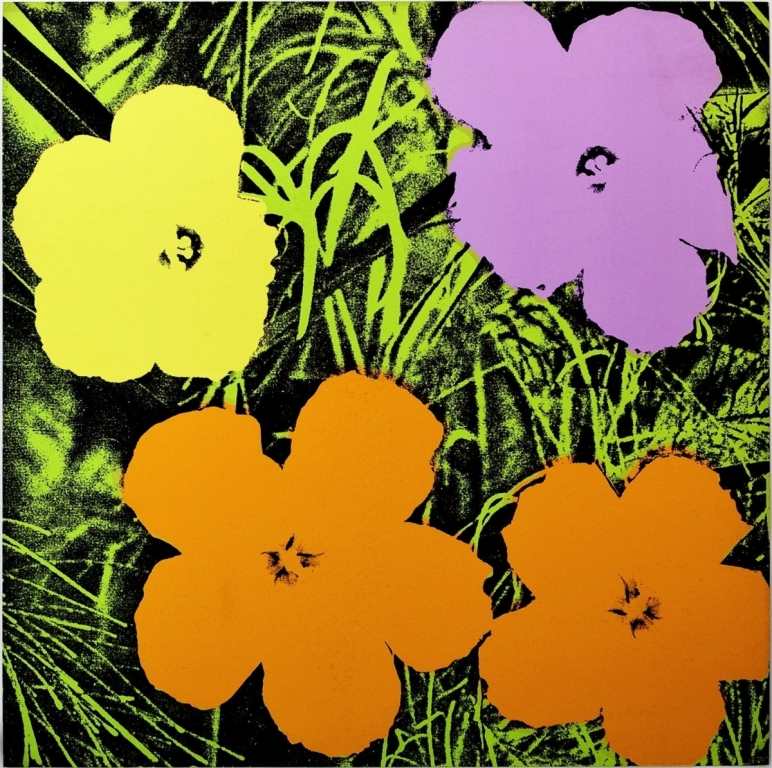 FLOWERS 67
Almost six years after his sellout show at the Leo Castelli Gallery where he introduced the world to his Flowers series, Warhol released a portfolio of ten screenprints simply entitled “Flowers.” The portfolio takes the photograph by Patricia Caulfield he had used previously, and he crops, abstracts and inverts the image. The only difference between the prints is the colors used. In this print, there are two orange flowers, a yellow flower, and a purple flower on green grass. The hibiscus flowers are very unique for Warhol because they are delicate and represent fragility and purity. They are a huge change from his Disaster series, which he was working on prior to this. Even though these are a very different subject matter than we are used to seeing from Warhol, they are one of his most popular series, especially because of the bright, pop colors.

FLOWERS 67 AS PART OF ANDY WARHOL’S LARGER BODY OF WORK:
It was very common for Warhol to source material from advertisements, newspapers and magazines. He found the photograph for this in a June 1964 issue of Popular Photography. What makes this subject matter unique is that it is different from his usual commercial or mass media imagery. What is very characteristic of Warhol is the vibrant and bright color combinations used throughout the portfolio. Flowers were the only subjects that Warhol continuously revisited throughout his entire career, exploring them in a variety of mediums. After seeing the first Flower paintings, Caulfield actually sued Warhol over usage of her image. Warhol tried to offer her two full portfolios in exchange, but a cash settlement was arranged instead. Because of this, Warhol began to take more photos himself and use them because he was afraid of getting sued again.