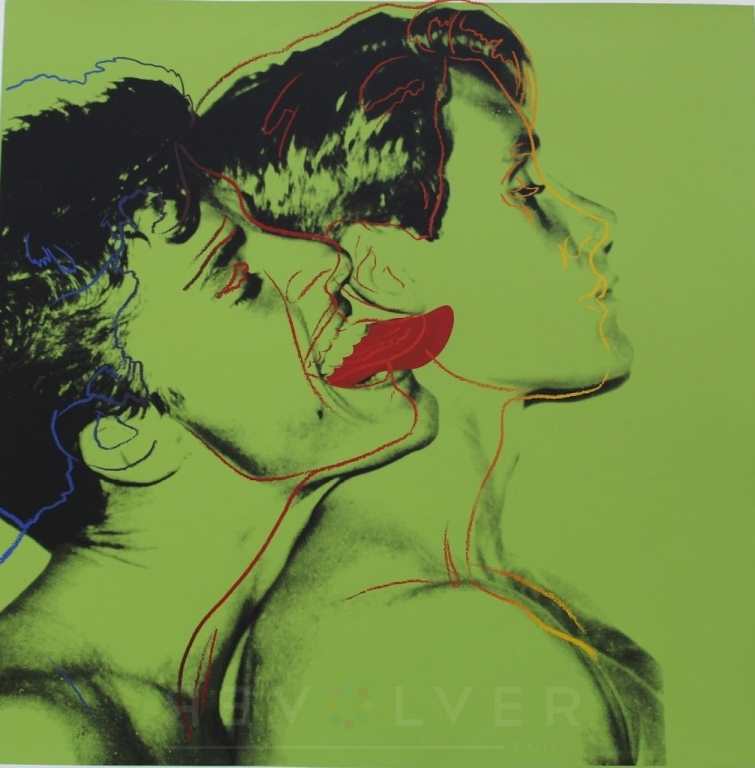 WARHOL QUERELLE A.27
For this rare print of two young men in a rather provocative pose Andy Warhol used a photograph taken in preparation of his poster for Rainer Werner Fassbinder’s film Querelle. In 1982 Warhol was commissioned by the German film director Rainer Fassbinder, to design a poster for his adaptation of Jean Genet’s classic novel, ‘Querelle’. The story of a sailor’s journey into the sexual underworld of a French port appealed to Warhol’s cinematic sensibilities and could easily have been one of his own productions (he had started making films in the 1960s). This design is based on a photograph by Warhol of two young men with bare shoulders. It is characteristic of his work in the 1980s, incorporating elements of both hand-drawn and photographic screenprinting. He focuses attention on the suggestively licking tongue by splashing it with a vibrant red.

WARHOL QUERELLE A.27 AS PART OF ANDY WARHOL’S LARGER BODY OF WORK
The film is based on Jean Genet’s scandalous novel Querelle de Brest, written in 1947 and published only six years later. It is not difficult to imagine that both Fassbinder and Warhol where fascinated by Genet’s violent and explicitly homoerotic story of the sailor, opium dealer and murderer Georges Querelle. The film’s notoriety was further heightened by Fassbinder’s death of drug overdose and its posthumous release in 1982. Warhol’s screenprints, unique colour variants from an unpublished print run of unknown size thus documents the collaboration of three of the most provocative creative minds of the 20th century: Genet, Fassbinder and Warhol. Collectable prints are rare and unique works of art – from original pre-war advertisement posters, to contemporary exhibitions prints, to out-of-print and hard to find gems.