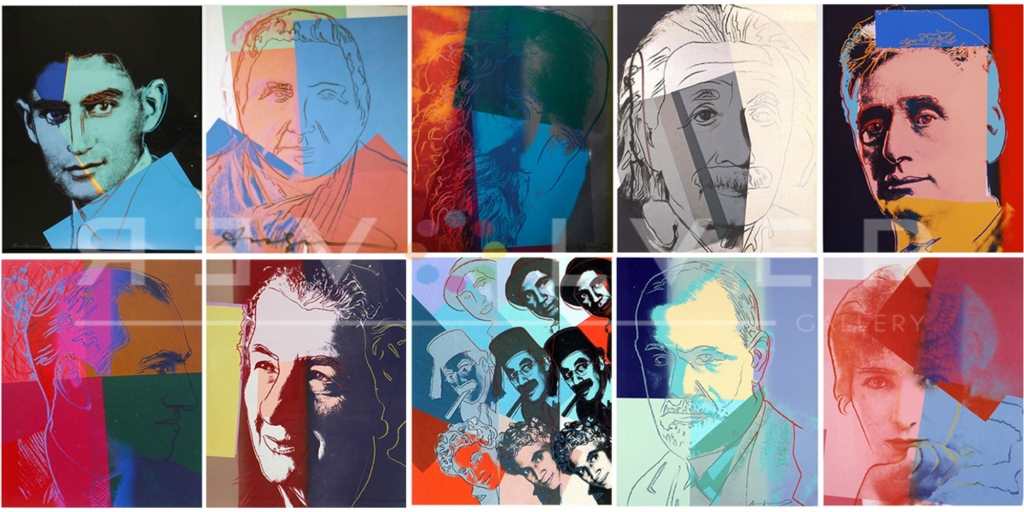 TEN PORTRAITS OF JEWS OF THE TWENTIETH CENTURY (TRIAL PROOF) AS PART OF ANDY WARHOL’S LARGER BODY OF WORK
Warhol became fascinated with a group of influential Jewish figures – a pantheon of great thinkers, politicians, performers, musicians and writers including French actress Sarah Bernhardt (1844-1923); the first Jewish judge of the United States Supreme Court, Louis Brandeis (1856-1941); renowned philosopher and educator Martin Buber (1878-1965); the theoretical physicist, Albert Einstein (1897-1955), widely regarded as the greatest scientist of the twentieth century; the hugely influential founder of the psychoanalytic school of psychology, Sigmund Freud (1856-1939); vaudeville, stage and film comedians, the Marx Brothers: Chico (1887-1961), Groucho (1890-1977), and Harpo (1888-1964); Israelís fourth Prime Minister and one of the founders of the State of Israel, Golda Meir (1898-1978); distinguished American composer George Gershwin (1898-1937); the eminent novelist, Franz Kafka (1883-1924); and avant-garde American writer, poet and playwright Gertrude Stein (1874-1946). The collective achievements of this group changed the course of the twentieth century and may be said to have influenced every aspect of human experience.