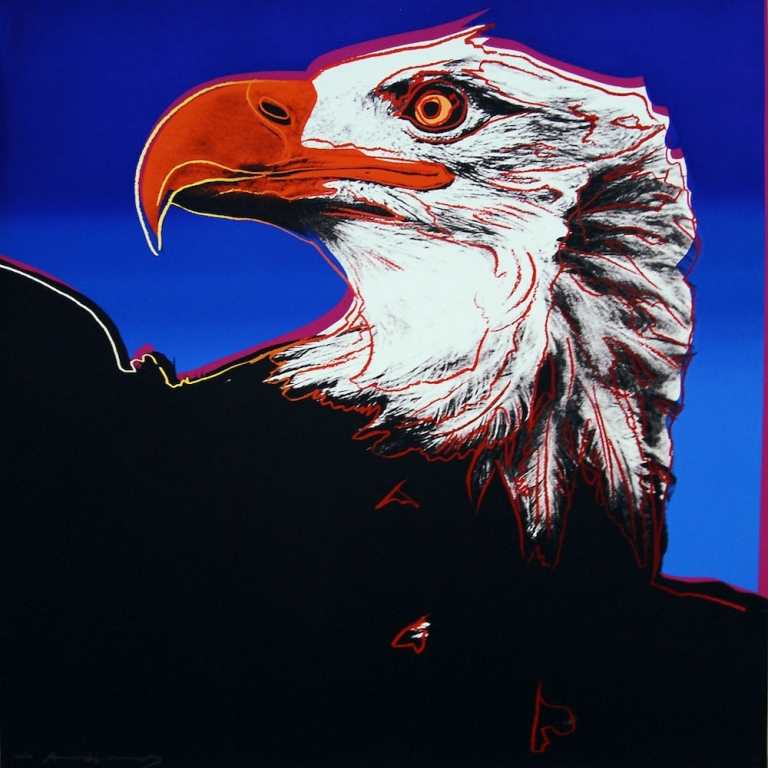 BALD EAGLE 296
Warhol’s Bald Eagle 296 is thought to have captured the wild beauty of this rare bird. The bald eagle is also the national bird of the United States and is a symbol that was chosen by the Founding Fathers in 1782 as the Great Seal of the United States. The Great Seal depicts the bald eagle with 13 red and white stripes, on a blue field with the same number of stars. The eagle holds an olive branch in his right talon and in his beak is a scroll with the motto “e pluribus unum.” This specific print is considered to be one of the most desirable images in the portfolio.

BALD EAGLE 296 AS PART OF ANDY WARHOL’S LARGER BODY OF WORK
In 1983, Warhol was commissioned by his friend and publisher Ron Feldman and his wife Freyda to create the series Endangered Species to raise environmental consciousness. Both Freyda and Ronald were celebrated political activists who were very active philanthropists. Warhol fondly referred to this series as his “Animals in Makeup” given the bold pop of colors he used to portray the animals as large than life. It was during the mid-1980s that Warhol was forming bonds with a number of younger artists in the New York art scene including Jean-Michel Basquiat, Julian Schnabel and David Salle. Warhol saw a re-emergence of critical and financial success during this period of his life. Other series produced during this period include the Shoes series, Myths series, and Ten Portraits of Jews of the Twentieth Century.