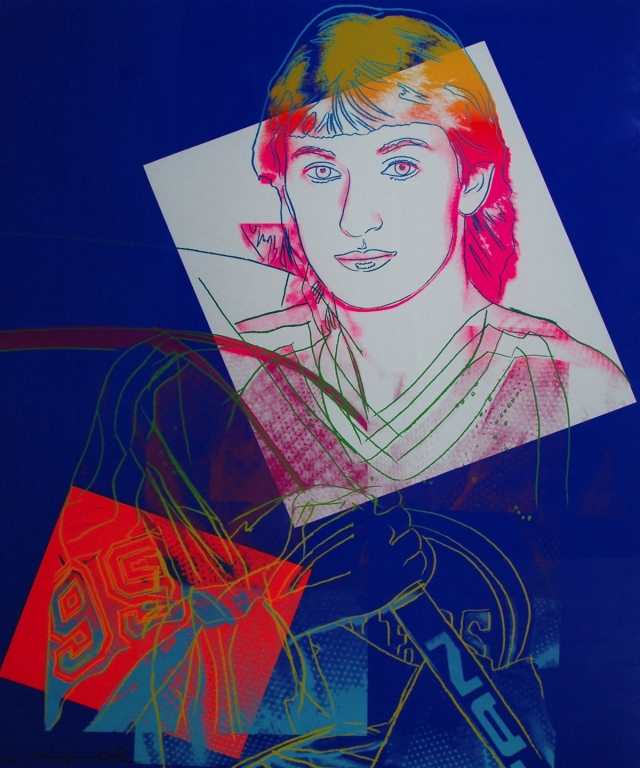 WAYNE GRETZKY 306
Warhol created this print of “The Great One” in 1984 to help draw attention to the Canadian art market. Though Warhol was not a big hockey fan he said of Gretzky “He’s more than a hockey player, he’s an entertainer” (the artist in an interview with Matthew Flamm for CBC Radio News, January 1983). Wayne Gretzky was Canada’s biggest celebrity in the early eighties and is still considered by many the greatest player of the game.

WAYNE GRETZKY 306 AS PART OF ANDY WARHOL’S LARGER BODY OF WORK
Andy Warhol (1928-1987) is widely credited as one of the most significant artists of the 20th century. After studying design at the Carnegie Institute of Technology, Warhol moved to New York in 1949 to pursue a career as a commercial artist. Though successful, Warhol wanted to be an independent painter. In the early 1960s he began to create paintings based on advertising imagery. He established his own studio, The Factory, and developed his signature style, employing commercial silkscreening techniques to create identical, mass-produced images on canvas. With his multiple images of soup cans, soda bottles, dollar bills and celebrities, Warhol revealed the beauty within mass culture and redefined the art world.