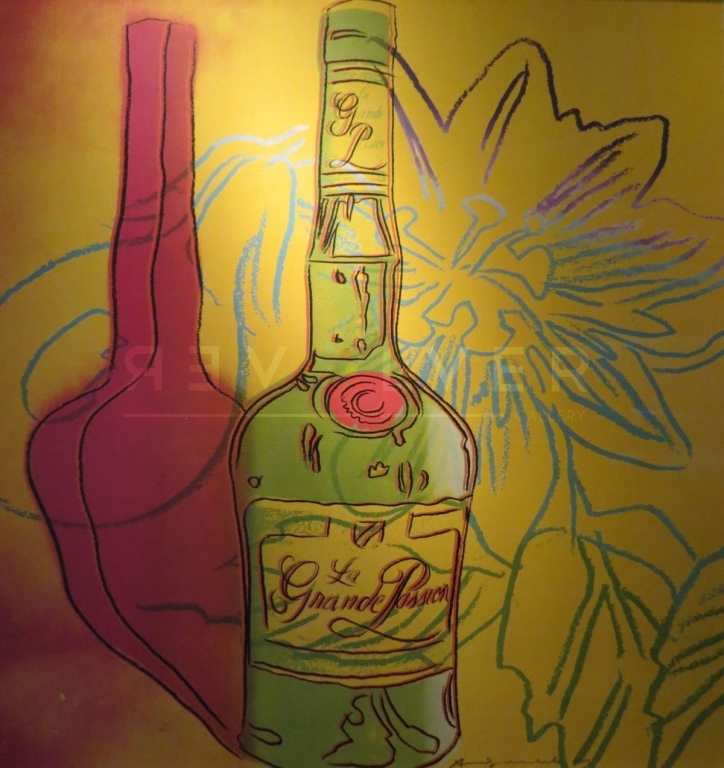 WARHOL LA GRANDE PASSION (FS IIIB.28)
This screenprint is part of Andy Warhol’s Advertisement Series that he created in the 1980s. This image in particular was created for Carillon Importers, Ltd. The composition is dominated by the bottle of La Grande Passion, whose shadow is exaggerated, emphasizing the bottle’s presence. With its hurried, continuous lines, here is a sketch-like quality to the print, giving the advertisement a more artistically modern spin. The image is based on a photograph taken by Warhol.

WARHOL LA GRANDE PASSION (FS IIIB.28) AS PART OF A LARGER BODY OF WORK
It wasn’t until the 1980’s, toward the end of Warhol’s career, that he began allowing businesses to commission him for advertising work. Many have noted that the style Warhol used in the colorful screenprints of La Grande Passion is similar to his early work in the 1950’s when he was a commercial illustrator. The advertisement is for “La Grande Passion, ” a passion fruit flavored brandy from France. Warhol depicts the liqueur bottle in the forefront, with a vibrant passion fruit flower in the background, drawn in multiple colors that were said to be inspired by pencils that had varicolored led.