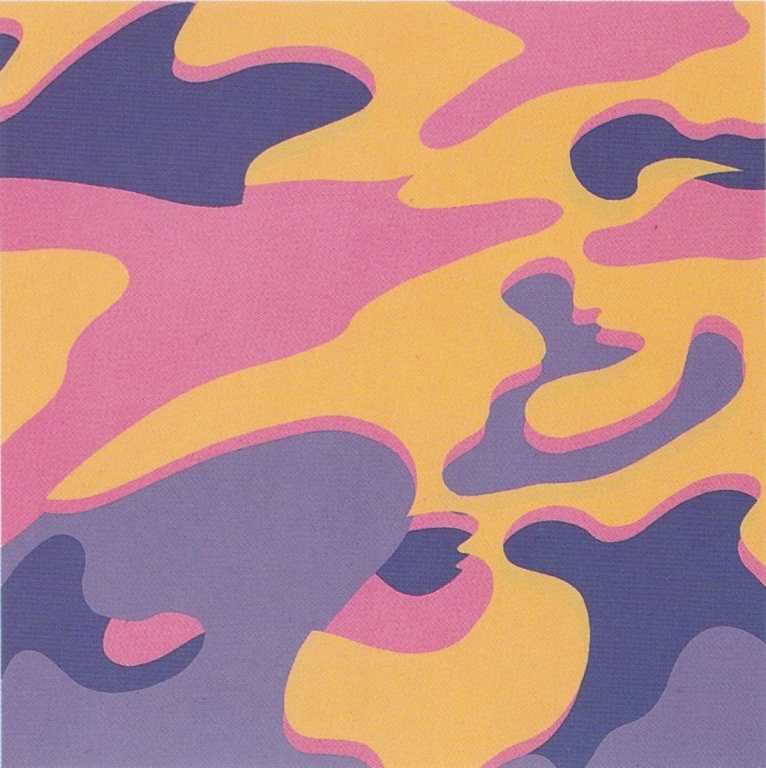 CAMOUFLAGE FS II.410
Warhol’s Camouflage portfolio of 8 screen prints features variations of the camouflage pattern with great use of a variety of bright, fluorescent colors. Warhol chose to work with this design because it was an abstract pattern that was also immediately recognizable. With the rising popularity of this print, Warhol was able to address its growing significance with America’s continuing military involvement in the Middle East. However, he took a different approach in producing camouflage patterns, which are typically used for disguise, by transforming them with eye-catching colors. This Camouflage print uses pink, orange, and purples, rather than the traditional green hues seen on military outfits.

CAMOUFLAGE FS II.410 AS PART OF ANDY WARHOL’S LARGER BODY OF WORK
Warhol created this portfolio to revolve around America’s military involvement in war; however, he also created juxtaposition with his versions of camouflage designs. The bright color use greatly contrasted the origins of camouflage, which were meant to conceal. Warhol introduced the opposition of disguise and identity. With this idea, the new camouflage attracted opportunities from the fashion industry. Bold colored camouflage soon became popular as it helped women stand out in urban settings.