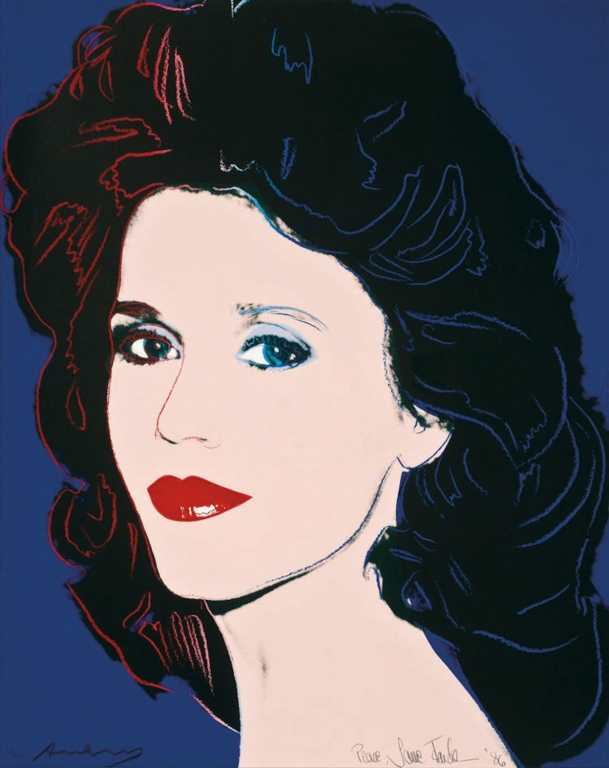 JANE FONDA 268
Jane Fonda was the celebrity sex symbol of her time and remains part of American pop culture to this day. Fonda rose to fame in the 1960s for her roles in Cat Ballou (1965) and Barbarella (1968). Later in her career, she began to devote much of her time to political activism. In 1982, Warhol offered this print as part of a fundraiser for Fonda’s then husband, Tom Hayden. The image is reminiscent of Warhol’s earlier portraits of movie stars, Liz Taylor and Marilyn Monroe.

JANE FONDA 268 AS PART OF ANDY WARHOL’S LARGER BODY OF WORK
This rare version is signed not only by Andy Warhol, but also by Jane Fonda herself. Jane Fonda 268 is the portrait of the American actress whose first notable film was Barbarella (1968). Warhol’s fascination with stardom shines through with this portrait. The deep royal blue background frames Fonda’s face and voluminous hair, emphasizing her vibrant red lips. The red and blue accenting lines convey an almost comic book like quality, a technique widely used by pop artists at the time. Fonda, who is well-known for her political activism and protest of war and violence against women, wrote “Peace, Jane Fonda” along the bottom of the image.