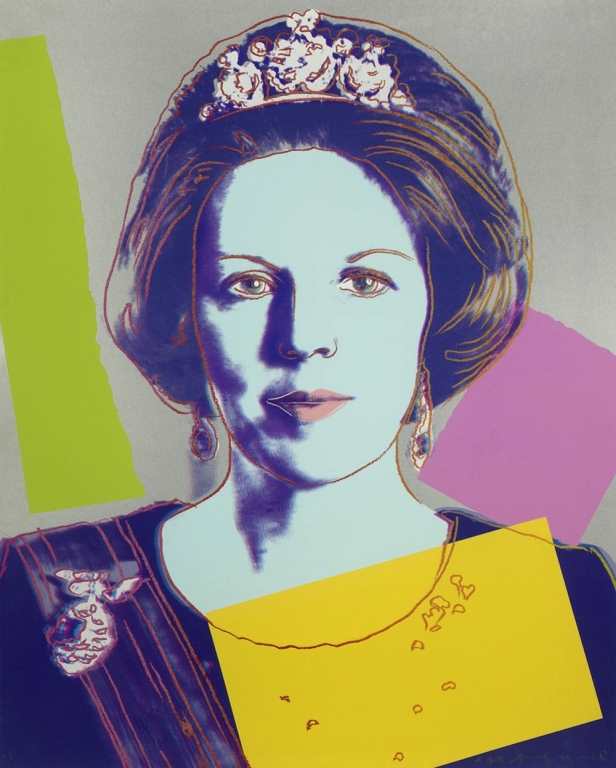 QUEEN BEATRIX 340
Queen Beatrix 340 was created in 1985 and forms a part of Andy Warhol’s celebrated series from that year, Reigning Queens: Royal Edition. This consisted of portraits of four female monarchs in their own right, rather than those married to a King. The four female monarchs were Queen Elizabeth II of the United Kingdom, Queen Margrethe II of Denmark, Queen Ntombi la Tfwala of Swaziland and Queen Beatrix, who in turn had succeeded her mother, Queen Juliana. In this way, Warhol has deliberately and light-heartedly included the Queen of the Netherlands in his vast pop pantheon alongside the artists, stars, transvestites and socialites who fill his pictures, aligning her with the broad sweep of popular culture which he had made his own realm.

QUEEN BEATRIX 340 AS PART OF ANDY WARHOL’S LARGER BODY OF WORK
Clearly, looking at Queen Beatrix of the Netherlands, there is a great contrast between the more standard realm of reverent royal portraiture and Warhol’s own adaptation of that genre. Here Queen Beatrix is presented in cool lilac shades that relate more to the world of disco and Studio 54 than to the regal sphere of the Dutch monarchy. She is presented as a glamorous neon-streaked figure staring out from the picture surface, revealing Warhol’s own ironic transformation. This was all the more the case because of the title of the series of which Queen Beatrix of the Netherlands forms a part. The Reigning Queens series manages to play with words, relating the pictures to Warhol’s earlier series of Drag Queens, formally know as his Ladies and Gentlemen series.