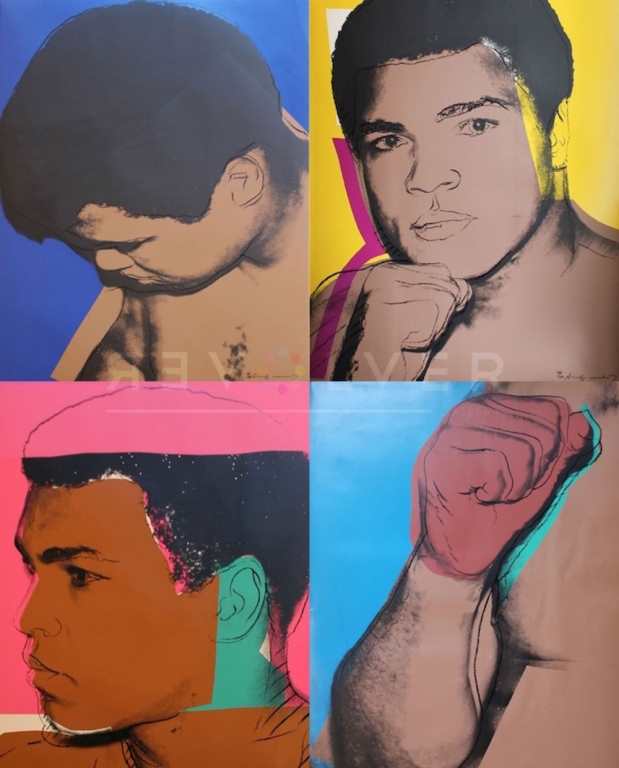 MUHAMMAD ALI COMPLETE PORTFOLIO 179-182 AS PART OF ANDY WARHOL’S LARGER BODY OF WORK
Warhol met Ali in 1977 while working on a photographic series based on celebrity ‘Athletes’. The project was initiated by the sports enthusiast and art collector Richard Weisman. The color screenprint portfolio soon followed. In 1978, Warhol photographed Muhammed Ali for his Athletes series. Richard Weisman, who was both an art collector and a sports enthusiast, initiated the project, which included athletes like soccer player, Pelé, and golfer, Jack Nicklaus. Even though Warhol wasn’t a fan of sports himself, he did see an interest in the realm of an athlete’s celebrity and fame. Ali proved to be a difficult subject, but Warhol managed to snap a few photos of him during a marathon session. For Ali, the image of his fist symbolizes his success, his identity and his celebrity. Although Warhol wasn’t a sports enthusiast, he was fascinated by the fame that athletes like Ali had acquired. He recalled: “I really got to love the athletes because they are the really big stars”.

Letter to the World (The Kick) (Unique)
Andy Warhol