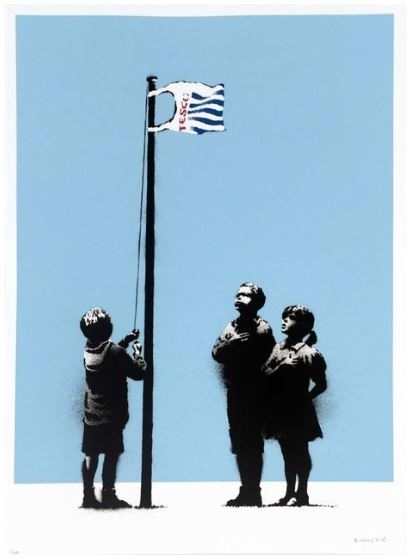 Banksy was the first UK graffiti artist to successfully straddle the divide between street and fine art. Having initially built his reputation on a series of high profile public stunts, such as installing his own painting into the Tate Museum, Banksy has become a worldwide phenomenon and the leader of the street art movement. He started making editioned prints in 2002 and created over 50 in an 8 year period. His wit, humour and message have connected with a large international audience and he has become one of the hottest and most important living contemporary artists in the world. Very Little Helps, also known as “Tesco Flag”, is a parody of Tesco Supermarket’s tagline “Every Little Helps”. Originally, the street mural was located on the side of a chemist shop on Essex Road, Islington, the print was released as a limited edition in 2008.Signed and numbered on the Verso. Sold Framed. Contact the gallery for hi-res images and further details.