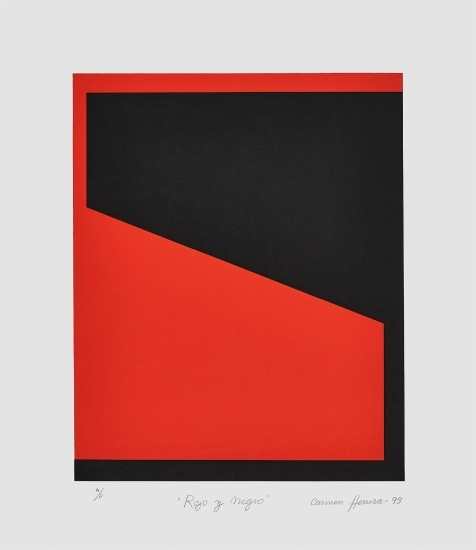 Born in Havana in 1915, Carmen Herrera is a Cuban-American abstract painter. In 1939 she moved to New York with her husband, Jesse Loewenthal. There she studied at the Art Students League from 1943 to 1947. In 1948 Herrera and Loewenthal moved to Paris, where they stayed for five years, and where she came into contact with Bauhaus, Russian Suprematism and De Stijl. They returned to New York in 1953, and Herrera joined the circle of postwar abstractionists such as Mark Rothko and Barnett Newman.
Carmen Herrera is finally receiving long-deserved recognition for her hard-edged geometric compositions, inspired by her training as an architect in Havana. Throughout her career, she focused on simplicity, color and line.
Herrera's work is chiefly concerned with formal simplicity and experimentation with bold color. Through the use of sharp lines and stark color contrasts, she creates dynamic and technically sophisticated compositions that reflect movement, balance and symmetry.