Comrade and Toast Series No. 4 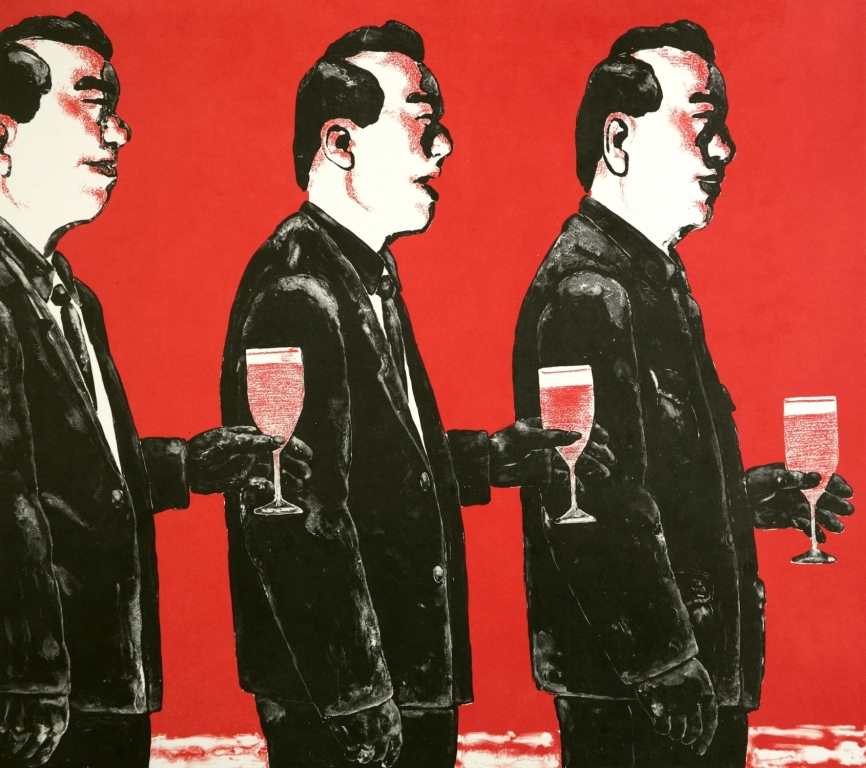 Biography: Born (1960) in Jining, Inner Mongolia, Su Xinping graduated from Tianjin Institute of Fine Arts in 1983 where he majored in Painting and Printmaking Instruction. Following graduation, Su Xinping returned to Inner Mongolia but a yearning for a life in the arts drew him to the Central Academy of Fine Arts (CAFA) Beijing where he graduated with a Masters Degree in Printmaking in 1989. This was followed by the Freeman Fellowship and Residency in the US (1998) and the Polytechnic School of Fine Arts, School of Art Lithography in 1999.

Su Xinping became known as “one of the leading figures in modern Chinese printmaking”.

“… no matter how his perspectives change and whatever his attitude may be towards the figures in his paintings, be it respect, critique or pity, there is always an underlying compassion in his work. In revealing the relationship between man and society, the works suggest a certain suspension, or even anxiety. The reflection on the reality and on man in his paintings is rather from the perspective of fate, than from a moral perspective. Certainly, that is not merely a fate that concerns one single individual Chinese, but all men floating in this “floating world”. – Gao Minglu, Art Critic

Su Xinping has won numerous awards and his works are in the collections of The British Museum, London; the Art Gallery of New South Wales and the National Gallery of Australia; the National Art Museum of China, Shanghai Art Museum and the Fukuoka Art Museum, Japan.

Arty-Fact: Su Xinping's 'Toasting Series' is made up of predominantly red and black prints depicting men in Mao jackets alongside men in Western jackets. The works are a commentary on both the social gap between young and old and the role of the banquet and the toast in society.

“In the toasting series I use irony to reveal issues of city life and the interaction of people – particularly in business and politics.” ~ Su Xinping

Hand and/or Feet: Chair and Books/Plate and Egg
John Baldessari