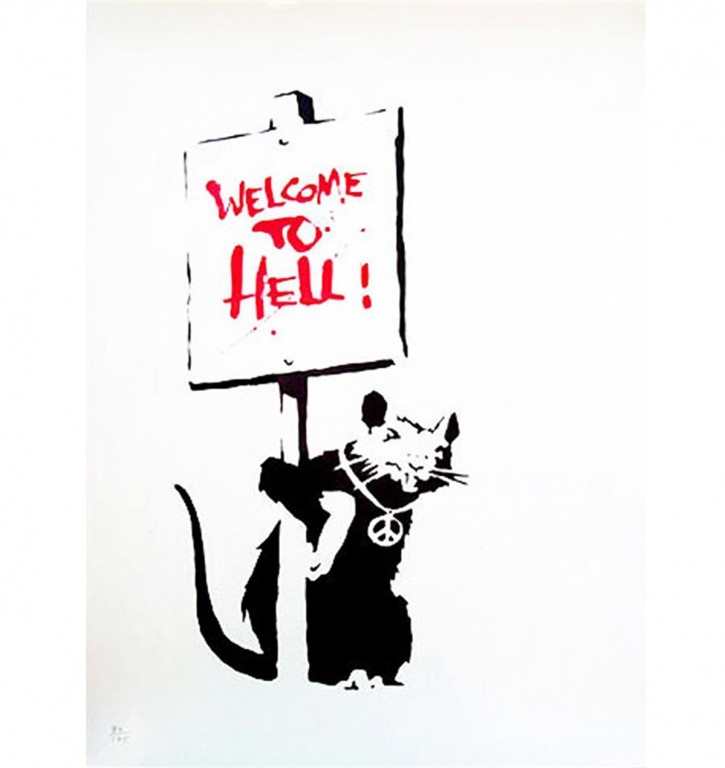 Because I’m Worthless is part of Banksy’s Placard Rat series, a trio of three screenprints featuring rats holding up placards with different messages, originally released in 2004. The other two are titled Get Out While You Can and Welcome To Hell. All were released in similar edition sizes. The whole series contains 75 signed screenprints and 175 unsigned prints each with red and pink colourways. The inspiration behind the Placard Rat series comes from the book Get Out While You Can – Escape the Rat Race by George Marshall, a book explaining how to find a way out of ‘salary slavery’. Banksy has reproduced variations of each of the Placard Rat prints as graffiti art in the streets of London.

Because I’m Worthless shows a rat painted in Banksy’s iconic black and white stencilled style. The rat is standing up on two feet, like a human, and is holding up a placard reading ‘Because I’m Worthless’ in bright red or pink writing. The only splash of colour in the composition is a pun of the L’Oreal tagline ‘Because I’m Worth it’. The rat, wearing a necklace bearing a peace sign, is seemingly engaged in a form of social protest. The rat is metaphorical – a symbol of everyman caught up in the rat race that Marshall describes in his book, considered by themselves, and those they work for as worthless. Presented like a protester, the rat stands for the victims within the context of the workplace, suffering from injustice and oppression.

Not You Again
John Crash Matos