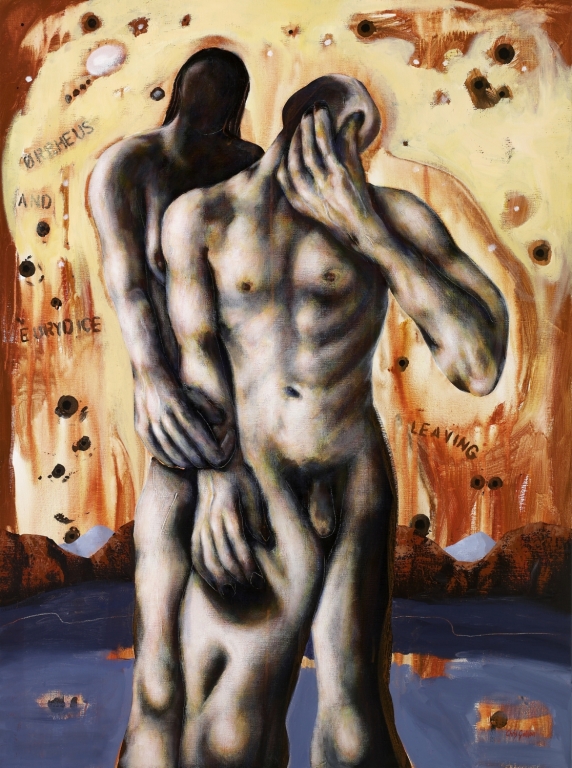 This painting is included in our 'Emergence & Transformation' exhibition, since it serves as both a reminder and a warning that we must stay vigilant, or potential tragedy may befall us. As we emerge from lockdown, we must not forget that the crisis is not over yet. Chris Gollon’s 'Orpheus and Eurydice' is a reminder that although the world is returning to some normality and it is tempting to stop, turn around and embrace those whom we love, we must keep our eyes fixed on the path ahead and keep moving forward in order to protect the future.

This work Chris Gollon painted just after his sojourn as Fellow and First Artist in Residence at the prestigious Institute of Advanced Study, Durham University, where he worked with some of the world's leading thinkers (including philosophers and Classicists) on the 'being Human' project. This painting is reproduced in the 2010 biography of Chris Gollon 'Humanity in Art' by art historian Tamsin Pickeral, endorsed by Bill Bryson OBE. In this excellent book on Gollon's life and work she observes: "Still with Durham at the back of his mind, Gollon undertook a number of paintings of figures taken from classical mythology. The lingering influence of Durham on these works is seen primarily in the artist’s methodology, since he was still reviewing subjects and then researching them before painting, while his normal working practice is far more organic and impulsive. Painterly techniques developed in the Durham works are also evident, particularly in the painting Orpheus and Eurydice (2009), another love story, though this one without a Hollywood ending. Greek mythology recounts how Orpheus’s wife Eurydice was fatally bitten by a snake. Orpheus who was an accomplished musician played such a sad dirge that the nymphs and gods wept and urged him to travel to the underworld to use his music to persuade Hades and Persephone to allow Eurydice to return to earth. Orpheus did this and Hades and Persephone agreed to let her go on one condition, that he must walk in front of her from the underworld, and not look back until they had both reached earth. Overcome with anxiety Orpheus peeked back at Eurydice before they had both arrived on the upper world, and she instantly slipped from him back into the shadowy realms forever. Gollon has depicted Orpheus as he looks back with Eurydice already starting to fade, her face blacked out. He has used great delicacy in touch, seen here in the way Eurydice’s finger curls against her husband’s arm, but in this painting it is the irradiance of the background setting that captivates. Here the colourist has again risen juxtaposing the pure and crystalline blue of the landscape against a fiercely volatile golden atmosphere that pops and crackles with the fiery rays of another realm. "

'The Two Friends (III): The Falling Out'
Chris Gollon