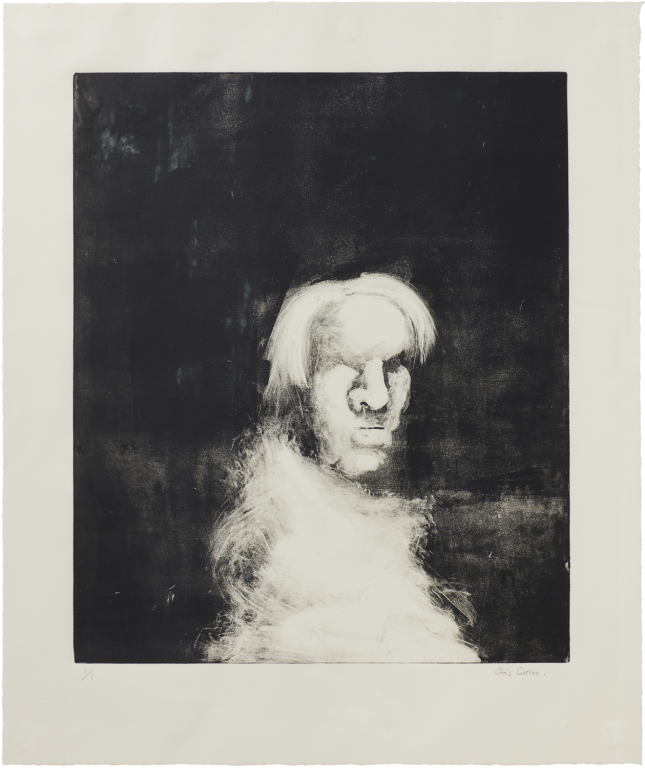 This monotype was one of the first Chris Gollon ever produced, made when he was invited to make prints at the Glasgow Print Studio in 1996. He was there to make etchings with aquatint, working with master printmaker Murray Robertson on the editions 'The Whisper (I) & (II)'. While the plates he had etched were being put through the press to create the editions, Gollon found himself with time on his hands and was offered the opportunity to make monotypes.

It was a printmaking process he took to immediately. This first series he named the 'Traveller' series, since at that time he had begun his first major themed series of paintings 'Road To Narragonia', with Narragonia being the Fool's Paradise. The making of the 'Traveller' series is described on in the Gollon biography ‘Humanity in Art’ by art historian Tamsin Pickeral), in which she notes:

"To create a monotype the artist inks a plate, then removes areas of ink using a rag, a brush or cotton buds to reveal the design. The plate is then passed through a press, transferring the image to a piece of paper. During this process most of the ink is transferred, and it is therefore not possible to print a second image from the plate, making each one unique. On this trip Gollon made a number of monotypes to form the 'Traveller' series, a haunting and at times comical collection of starkly black-and-white prints."

This monotype also features in the 2019 film installation FIREWALL, a collaboration with the Sleaford Mods: a work of art, music and film premiered in the major museum retrospective CHRIS GOLLON: Beyond the Horizon at Huddersfield Art Gallery 12th Oct 2019 – 18th January 2020. Although it does not appear in the museum exhibition catalogue, it was also shown in the museum exhibition, and therefore has museum provenance. You can watch FIREWALL on our Videos page on this site, or on the Films page of our gallery's website.