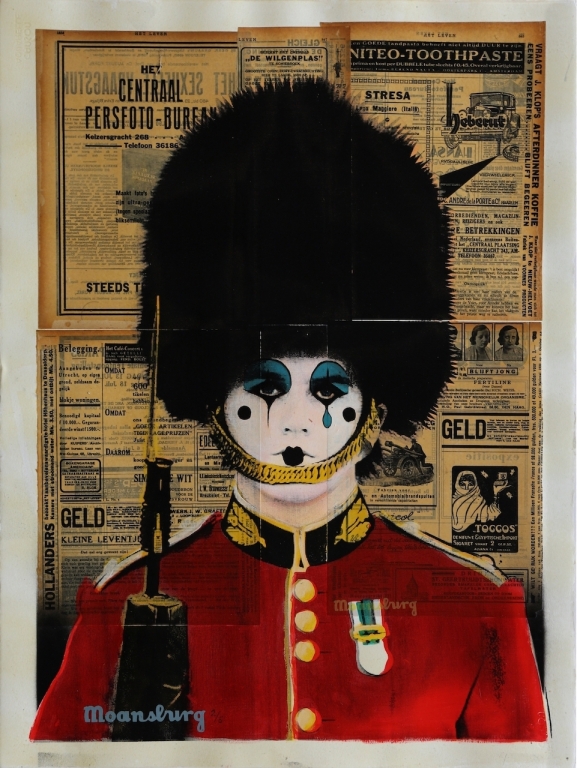 Medium: Mixed media on handmade paper, signed by the artist

Arty-Fact: Crail's artwork is inspired by his experiences managing a strip club. Behind the scenes, he captured the performers in the nightclub, and used the posters announcing club shows as backgrounds for his work.

The style in which Crail works could be described as "Pop-Art-Extra". His images are created using a layering of different mediums. Stenciling and screen printing are two primary techniques used by the artist.

Crail Moansburg is a Dutch pop artist known for his colourful and expressive artwork. Produced in his studio in the Karl Marx Factory in The Hague, the old iron curling factory is also the creative hub for the Crail Moansburg artist collective.

Moansburg was born to a German mother and American father. He attended the Royal Art Academy in Arnhem. Painting was not enough for the young artist, so he interrupted his career as an art student to become a manager in a club in the Spijkerkwartier district, the part of Arnhem previously known for its "red lights".

Inspired by the new job, Moansburg took up his paintbrush again. Behind the scenes, the artist captured the performers in the nightclub. He also used posters announcing club shows in the background of his work.

After the local authorities dismantled the club, Moansburg had no choice but to focus on his original talent again. Originating from the thought that art should be, above all, layered, his aesthetics are explicit. His paintings depict the randomness of the fetishes people have developed when influenced by the culture of capitalism. His art also shows a high admiration for the past.