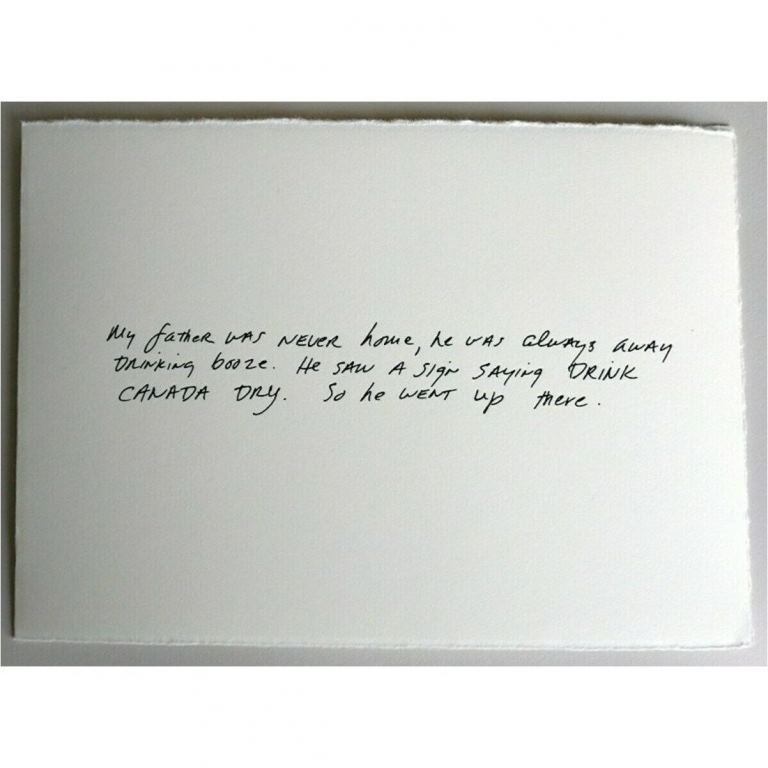 
Notes: Text image from Richard Prince's iconic Jokes series. Signed and numbered by the artist in ink on interior of card.

Looking like a classic Hallmark card, this greeting card features a joke handwritten by the artist: "My father was never home, he was always away drinking booze. He saw a sign saying DRINK CANADA DRY. So he went up there."

Incorporating jokes reflective of the “borscht belt” humor prevalent in the 1950's, Prince's Joke works tap into social preoccupations of the national subconscious. Prior to Prince's use of the jokes, many had infiltrated popular culture, gradually losing their original authors to become adopted by a largely oral tradition.

Beginning in 1984, Richard Prince began assembling one-line gag cartoons and ‘borscht belt’ jokes from the 1950's which he redrew onto small pieces of paper. "Artists were casting sculptures in bronze, making huge paintings, talking about prices and clothes and cars and spending vast amounts of money. So I wrote jokes on little pieces of paper and sold them for $10 each". Following the hand-written jokes and subsequent works in which cartoon images were silk-screened onto canvas, in 1987 Prince adopted a more radical, formulaic strategy of mechanically reproducing classic one liners and gags onto a flat monochrome canvas.

Richard Prince's work has been among the most innovative art produced in the United States during the past 30 years. His deceptively simple act in 1977 of rephotographing advertising images and presenting them as his own ushered in an entirely new, critical approach to art-making — one that questioned notions of originality and the privileged status of the unique aesthetic object. Prince's technique involves appropriation; he pilfers freely from the vast image bank of popular culture to create works that simultaneously embrace and critique a quintessentially American sensibility: the Marlboro Man, muscle cars, biker chicks, off-color jokes, gag cartoons, and pulp fiction.

A View of the City from South Bank
Daniela White