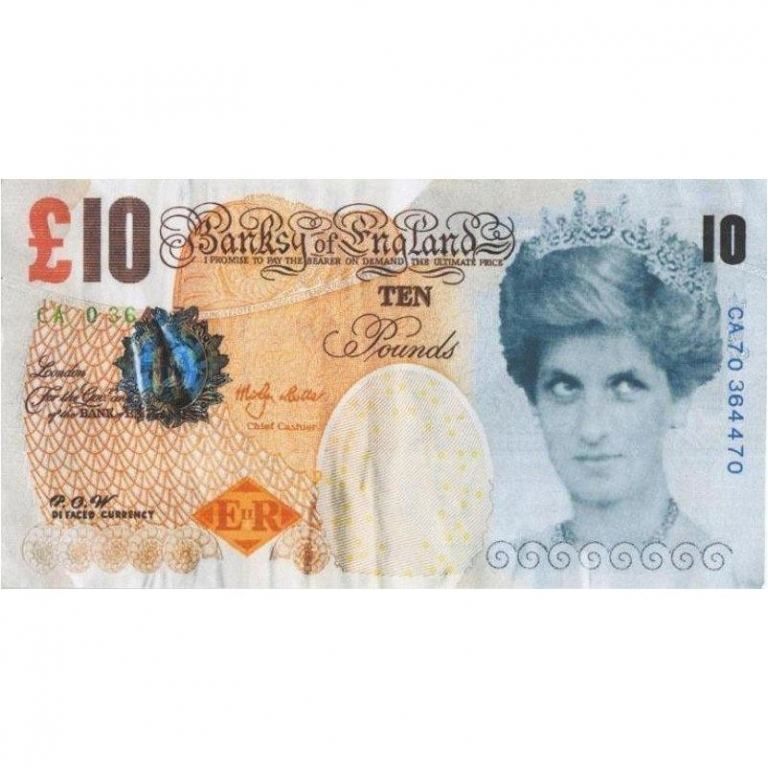 NOTES: Banksy is known for his irreverent humour and critically witty pieces. Here his punning, counterfeit ten-pound note, replaces the queen’s portrait with the iconic princess whose death provoked a national and media sensation.

An important piece within the historical context of Banksy’s output, the ‘Di Faced Tenner’ is a pun on the word ‘defaced’ and refers to the fact that here Banksy has altered the familiar £10 note by replacing the portrait of Queen Elizabeth II with that of the late Princess Diana. The piece can be seen as a comment on Diana’s estrangement of Diana from the royal family, her critique of the British royal institution, and the hounding by the press that ensued. Instead of ‘Bank of England’, the note reads, ‘Banksy of England’. Under the banner, an inscription reads, ‘I promise to pay the bearer on demand the ultimate price’, a reference to the fate of the late Princess.

The reverse side of the print remains mainly unchanged except for the motto ‘Trust No One’ written in the lower-right corner, beneath the portrait of Charles Darwin. The note is printed with inks on paper near identical to that used on official UK-issued currency.

The piece was created in 2004, largely as a public art stunt at the Notting Hill Carnival and at the Reading Festival. There were reports that after the events that some of these counterfeit notes were actually found used found in the tills, presumably having been mistaken by some for real notes during the events.

Unlike American artist J.S. Boggs, who is famous for his hand-drawn depictions of notes, Banksy was never wanted for any counterfeiting charges. The series is also featured in Banksy’s 2010 documentary ‘Exit Through the Gift Shop’.

Other listings from Baldwin Projects

Love Is In The Air
Banksy